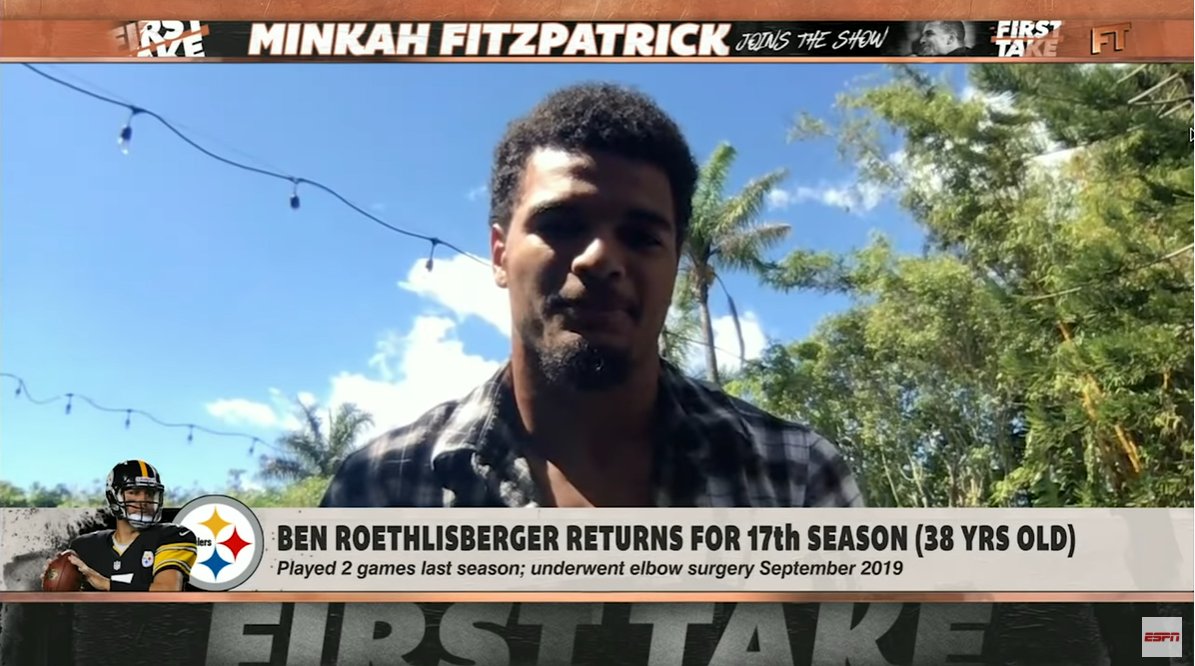 By the time the Pittsburgh Steelers acquired safety Minkah Fitzpatrick last season via a trade with the Miami Dolphins, starting quarterback Ben Roethlisberger was already lost for the remainder of it due to an elbow injury. While Fitzpatrick never got an opportunity to go against Roethlisberger on the practice field after arriving in Pittsburgh via the trade, he now knows enough about him to say that people shouldn’t doubt that he’ll be just as good, if not better, of a quarterback than he was prior to his injury.

During his Thursday appearance on ‘First Take’ on ESPN, Fitzpatrick was asked if he has any sort of message for the people who are currently saying that Roethlisberger’s best days are now behind him.

“And he’s also a competitor, you know what I’m saying? And he lost a year of doing what he loves. So, he’s definitely gonna come back with a chip on his shoulder and ready to just go out there and make plays.”

Fitzpatrick also looks forward to Roethlisberger returning to action in 2020 as he believes going against the starting quarterback will help out his own development moving forward.

“And I’m excited about it, because just going up against him in practice and seeing him on the field, I know I’m going to become better from it and it’s going to be a whole lot of fun,” Fitzpatrick said Thursday.

While Fitzpatrick does look forward to going against Roethlisberger in practice this coming season, he won’t fear the challenge. We know that because of the answer that he gave during his Thursday interview when he was asked to comment on a few other former NFL players-turned-analysts apparently recently saying that having to go against Kansas City Chiefs quarterback Patrick Mahomes moving forward should now instill fear in a lot of his opponents.

“I will say this, I’m a grown man and I prepare very, very diligently at what I do so I don’t fear anybody out there on the field,” Fitzpatrick told Stephen A. Smith on Thursday. “But there are some guys that you come across like, ‘hey, this is a good player, or he’s a unique-type player,’ and I could say that about Patrick Mahomes.

“I think preparing for him, you have to prepare for things that you’re just not really used to, with the no-look passes and crazy sidearm passes. And you know he has great weapons around him with Tyreek Hill and everybody else out there. And so, I think he’s a great player, he’s a unique-type player and obviously he gets results. And so, preparing for him, you might go in with a little more of a chip on your shoulder when you’re going against a player like that. But I think it’s a little bit extreme to say that I fear going against another player.”

Fortunately for Fitzpatrick and the Steelers, they will not be tasked with playing against the Chiefs and Mahomes during the 2020 regular season. Even so, the Steelers path to Super Bowl this upcoming season could include a playoff game against the Chiefs, assuming both teams make the postseason tournament on the AFC side.