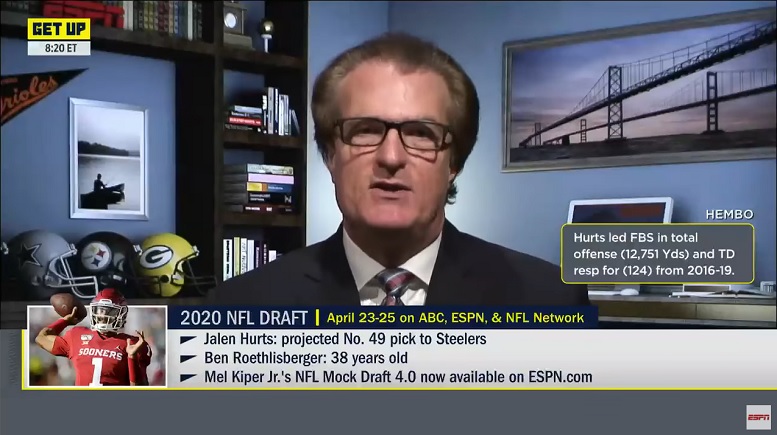 With the 2020 NFL Draft now just a little more than a week away, there are still “experts” who believe there’s a good chance that the Pittsburgh Steelers will select a quarterback with one of their picks. Mel Kiper Jr. of ESPN is one of those “experts.”

In his most recent two-round mock draft that was released Tuesday morning, Kiper has the Steelers selecting Oklahoma quarterback Jalen Hurts 49th overall in the second-round. Kiper writes:

I was asked last week about the possibility of Hurts going in the first round, and I said that he’s likely going on Day 2. Well, Hurts is a hot name right now, and I don’t think he gets out of the second round. Coaches and scouts love Hurts’ intangibles, and he improved his accuracy in his season under Lincoln Riley. He fits in Pittsburgh, where neither Mason Rudolph nor Devlin Hodges showed much while filling in for Ben Roethlisberger, 38, last season.

Kiper was also a Tuesday morning guest on ‘Get Up’ and attempted to further explain his reasoning of why he thinks the Steelers might draft Hurts 49th overall and how he doesn’t expect the young quarterback to fall out of the second-round.

“Well, you look at what Lamar Jackson has meant to the Baltimore Ravens, think about Taysom Hill in New Orleans, all of that I think helps the way the trendy league is, kind of a copycat league,” Kiper said. “I think they see that they can have packages for Jalen Hurts as a rookie to give defensive coordinators a lot to think about.

“Think about the Pittsburgh Steelers, they need an heir apparent to Big Ben. You’re in a division right now with Lamar Jackson, Mike Tomlin is, with Joe Burrow now going to the Bengals, more than likely, and with Baker Mayfield. So, he knows Big Ben can’t play forever, needs to start developing that quarterback. Jalen Hurts, I’m told by people that think he’ll not get out of round-two. That the New England Patriots may also have an interest in Jalen Hurts. Whether it’s true or not, that’s what you hear. But I am definitely been told by several teams he will not get out of round-two.”

Well, at least we don’t have too much longer to wait to find out if the Steelers will select Hurts in this year’s draft. He’s been the quarterback that most draftniks try to link to being a possible selection for the Steelers at some point during the draft despite team president Art Rooney II, general manager Kevin Colbert and head coach Mike Tomlin all saying at different times so far this offseason that each are fine with the current quarterback depth chart.

In his 2020 Hot 150 that was released on Monday, Gil Brandt of nfl.com has Hurts ranked 53rd overall. In short, the Steelers more than likely would need to draft Hurts at 49 overall if they indeed want him.