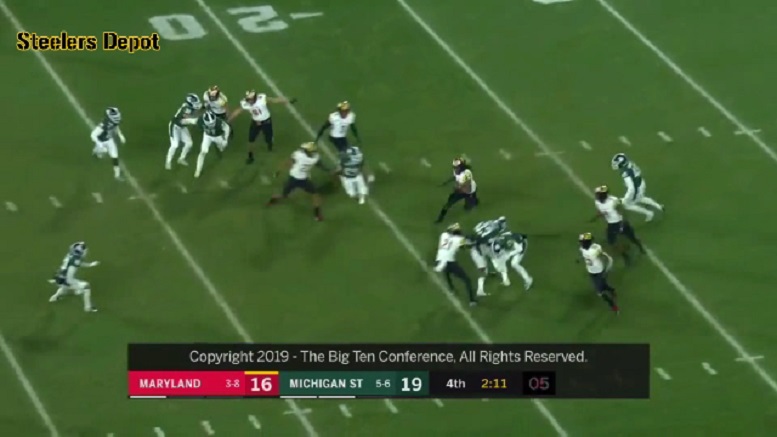 The Pittsburgh Steelers selected six players in the 2020 NFL Draft this past weekend and the first four picked, wide receiver Chase Claypool, outside linebacker Alex Highsmith, running back Anthony McFarland Jr. and safety Antoine Brooks Jr., should all be expected to make the initial 53-man roster. Of those four players, Claypool, Highsmith and Brooks, are already expected to be contributors on special teams during their rookie seasons. But what about McFarland, can he also contribute anything to Steelers during his rookie season despite being considered undersized at 5081, 208-pounds? Maryland head coach Mike Locksley thinks so.

In a recent interview on 93.7 The Fan, Locksley, who is now entering his second season as Maryland’s head coach, believes McFarland has the skill set to be a returner in the NFL right away even though he barely did any of that in his two years with the Terrapins.

“Yeah, there’s no doubt,” Locksley said. “You know, he was a guy that we had returning kicks. Now, because of him being our number-one guy, Javon Leake obviously ended up doing it for us and he won the Special Teams Player of the Year [award], but very capable of returning kicks. But the other thing, and this was something that he did as well, is we put him back there. Every day he caught punts. Now, we never had to put him in a game as a punt returner, but he is capable of adding special teams value as a returner.”

McFarland only returned one kickoff during his college career at that came late in what would ultimately be the last game of his college career. Against Michigan State, McFarland received a late fourth quarter kickoff at his team’s own 3-yard-line and returned the football down the left side of the field for 40 yards. You can see that return below.

The Steelers return units have been abysmal the last several seasons and it’s time for that to change in 2020. The Steelers let running back Kerrith Whyte Jr. return the lion’s share of the team’s kickoffs last season after wide receiver Ryan Switzer went down injured. Whyte, by the way, was added to the Steelers roster in the middle of November and had yet to return a kickoff in the NFL, even though he did handle that duty quite extensively in college. In short, the Steelers should at least give McFarland an opportunity to return kickoffs, and maybe even punts, during training camp and the preseason, assuming both of those events happen later this summer.