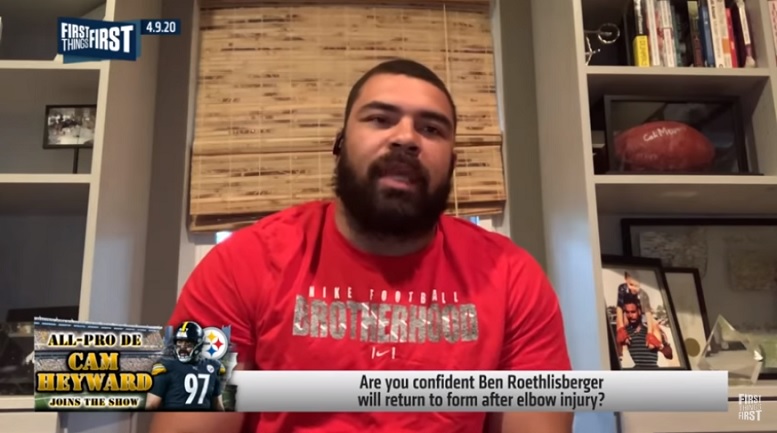 As far as we know right now, the rehab of Pittsburgh Steelers quarterback Ben Roethlisberger is going well and the offensive team captain even updated where he’s at in the process during a Wednesday morning radio interview, On Thursday, the Steelers defensive captain, defensive lineman Cameron Heyward, was a guest on ‘First Things First’ and was asked during his interview if he’s confident that Roethlisberger will be the same quarterback he was before his elbow injury because he’s been out a while now.

“Yeah, but I look at it as time for his body to heal,” Heyward said of Roethlisberger. “You know, you look at LeBron [James] taking that time off last year, finally getting a chance to rest from the playoffs, and I kind of look at it like that where Ben gets a chance to relax and let his body, you know, catch back up. So, I know he looks like he’s been on Castaway, but I’m really excited to see where he’s going to be at at the end of this.”

Most of the narrative concerning Roethlisberger dating back to the middle of last season is that the Steelers quarterback looks fat and out of shape with him supporting a full beard that borderlines on the one former Steelers defensive end Brett Keisel has grown annually for at least a decade. While Roethlisberger has already attempted to dispel the “fat rumors” several weeks ago, on Thursday Heyward was asked to do the same and he blamed it on the beard.

“I just think the beard makes your face way bigger,” said the bearded Heyward. “I’ll be honest, like, I know I have a big head, so it doesn’t really matter, but I think for Ben, the beard’s gonna make you look bigger than you are. But I think he’s been doing a great job of staying in shape. I actually think he was doing a lot of cardio throughout the season just trying to make sure he didn’t falter off. So, I don’t think he’s going to be looking pudgy out there when we get out on the football field.”

Personally, I think this whole thing with Roethlisberger dating back to last season is silly. It’s clearly the beard that makes him look heavier. When the time comes for Roethlisberger to finally shave off the beard, I’m sure he’ll look the same that he usually does around the start of training camp. In short, he won’t look pudgy.