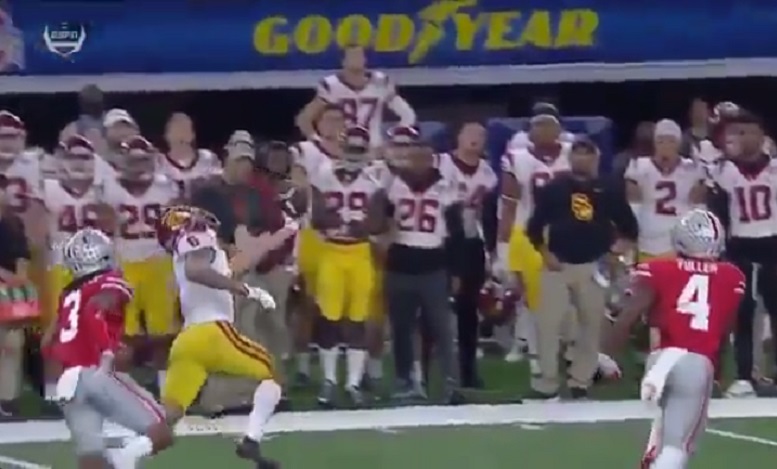 A few weeks ago, I did a 2019 multi-game contextualization on USC wide receiver Michael Pittman Jr. My final assessment on that contextualization of those six games was that the tape didn’t show Pittman to be a very dynamic player overall and that there was very little “WOW” in those targets I broke down. I also posted that Pittman looked to be a very consistent player on tape, however, and especially on the left side of the offense. Coming out of that contextualization I viewed Pittman as more of a late third-round selection. With Pittman entering the final week of the pre-draft process still considered by many to be a mid to late second-round selection, I figured I should dig deeper into his tape to see what I am missing on him. I’m glad I did.

As part of my deeper dive into Pittman’s college tape, I wanted to look at the plays he did make. Yes, the highlights, and all of them. The plays I wanted to see were his explosive plays that gained 20 or more yards and all receiving touchdowns dating back to his 2016 freshman season at USC. In total, this deeper dive required me finding and watching a total of 48 plays. Included in those 48 plays are 19 touchdown receptions and 38 of them were good for 20 yards or more.

I was fortunate enough to find all 48 of these plays and contextualized all of them below in a table. As usual, the contextualized data includes down, distance, time of game, line of scrimmage, pass distance, yards after the catch, area of the field and most importantly, a link to each play for viewing.

So, what stuck out the most to me after doing this deeper dive on Pittman? For starters, he has quite a few contested catches and “wow” plays buried in his tape prior to this past 2019 season. In fact, below are two plays from Pittman’s 2017 tape that are included in the full contextualization that best exemplify the kind of contested catch and “wow” plays he’s capable of making.

While there are not a lot of them, Pittman’s pre-2019 tape also showed us he can run routes and make catches on the right side of the formation, which is something that was hard to find in his 2019 tape.

Additionally, 29 of these 48 plays include Pittman catching the football more than 15 yards down the field. That’s super encouraging to see as there were just eight such catches in the 2019 six-game contextualization that I did on him several weeks ago. While he’s still not burner in my eyes after this deeper dive into his tape, Pittman can get down the field with ease and most importantly, make catches.

So, where do I come in now on Pittman after doing this deeper dive? I now see why he’s considered a second-round talent and why there’s a good chance he might be the first player selected by the Pittsburgh Steelers in the 2020 NFL draft at No. 49 overall in the second-round.

Prior to this deeper tape dive, Pittman had already checked several needed boxes to be the Steelers second-round selection this year. He has the experience, reception totals, was a captain in college and possesses an NFL bloodline. He’s SPARKy, was at the Senior Bowl and hails from a Power 5 college as well. Oh, his character seems to be squeaky clean and he appears to have heart and smarts. I can now say his college tape warrants him being the Steelers selection as well thanks to me taking time to dig deeper into it. Make sure you click on several of these plays to see for yourself.