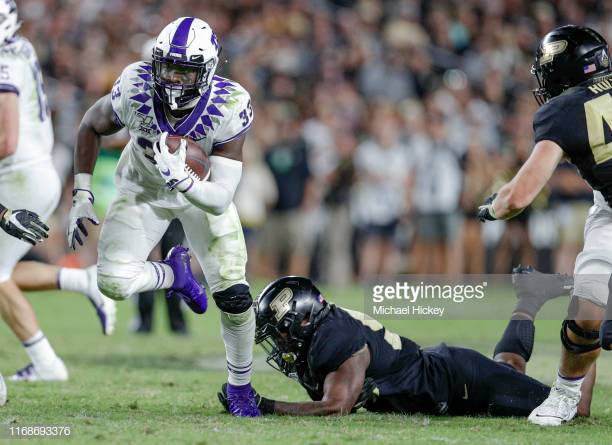 According to a recent post by Alex Kozora, TCU running back Sewo Olonilua fits the criteria for what the Pittsburgh Steelers look for when it comes to that position. The 6025, 232-pound running back has also had the Steelers’ interest during the pre-draft process, according to his trainer Rischad Whitfield. With multiple boxes checked with less than two weeks to go until the 2020 NFL Draft takes place, it’s time to take a deeper dive into Olonilua’s tape, and especially his career explosive runs at TCU.

Surprisingly, Olonilua only tallied 10 runs of 20 yards or longer in four seasons at TCU on 348 total carries. He also only had 34 runs of 10 yards or longer. His 10 explosive runs resulted in 278 yards gained, which is 17.1 percent of his 1624 total career rushing yards. In summation, Olonilua averaged 3.98 yards per carry on his other 338 carries.

The first thing that jumps out the most statically about Olonilua’s 10 explosive college runs is that the longest was just 35 yards. Next, it should be noted that one of Olonilua’s explosive runs included him getting hit after gaining 20 yards and fumbling the football into the end zone. Fortunately for Olonilua, that loose football was recovered by a teammate in the end zone for a touchdown.

Olonilua runs also show a running back that is very decisive and thus he gets up field in a hurry. He’s a pure power runner and easily breaks arm and shoulder tackles at the line of scrimmage and beyond. Olonilua certainly won’t be confused for a shifty back, nor will he be characterized as a burner with long speed. He’d much rather just run over defenders instead of wasting time attempting to juke them.

Only two other running backs that were invited to this year’s scouting combine registered 40-yard dash times slower than Olonilua’s 4.66-seconds. Even so, the Steelers have drafted quite a few running backs over the years that have turned in 40-yard dash times of 4.60-seconds or slower. Will Olonilua be the next one? Many draftniks have Olonilua pegged as a late day-three draft prospect.