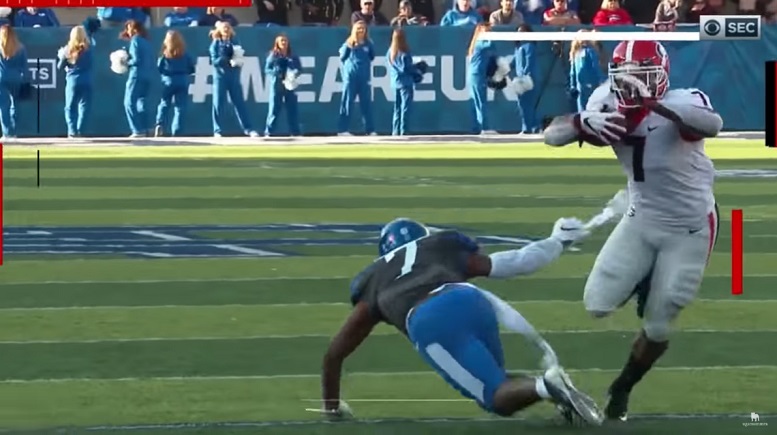 Will Georgia running back D’Andre Swift be the first player from his position group selected in the 2020 NFL Draft? There’s a good chance he will be and he’s the odds-on favorite to be as well. After already looking closely at several other top running backs in this year’s draft class such as Jonathan Taylor, Cam Akers, J.K. Dobbins and Clyde Edwards-Helaire, I spent a several hours Saturday morning fully breaking down Swift, who rushed for 2,885 yards and 20 touchdowns during his college career at Georgia on 440 total attempts.

As usual, I contextualized all of Swift’s explosive runs of 20 yards or longer for everyone as part of my player study and breakdown. He had 30 such runs during his three seasons at Georgia and I was able to find video of all of them. Those 30 explosive runs totaled 1,016 yards, or 35.2 percent of all career college rushing yardage. His other 410 carries averaged 4.6 yards per attempt, if you’re scoring at home.

Swift’s explosive runs include a nice mix of first contact coming either near the line of scrimmage, more than 10 yards down the field, or none at all. While not a huge broken tackle producer, Swift had a few nice ones on these 30 explosive play runs.

The thing that stands out the most in these 30 explosive runs by Swift is his ability to cut on a dime and make defenders miss him completely within the first 10 yards. Of all the top running backs in this year’s draft class that I have watched during the pre-selection process, Swift is the shiftiest of them all.

While not highlighted or contextualized below, Swift also produced quite a few explosive play receptions throughout his college career at Georgia. In fact, he had 9 total receptions that produced 20 yards or more and tallied 73 receptions in total for 666 yards and 5 touchdowns.

In my opinion, Swift is the top running back in this year’s draft class and thus I like his chances of being selected late in the first round or within the first 10 picks of the second round.