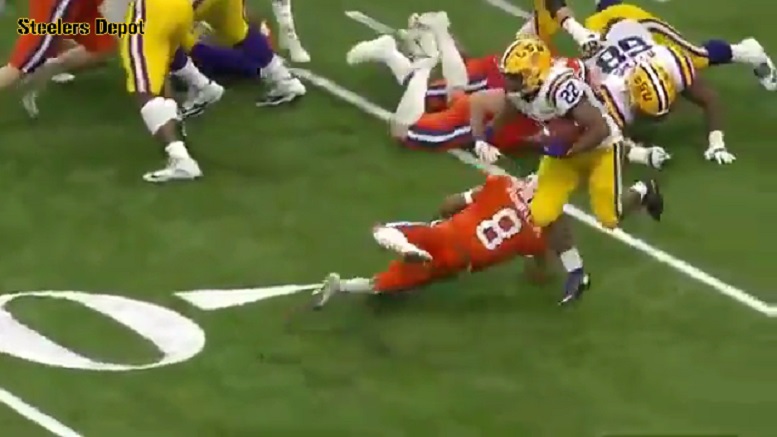 I’ve been quite busy taking deep dives into the perceived top-rated running backs in the 2020 NFL Draft class and some of that focus has entailed me contextualizing the explosive runs made by each. After already doing contextualization posts on college explosive runs registered by running backs Jonathan Taylor, Cam Akers and J.K. Dobbins, it’s time for me to do the same for LSU running back Clyde Edwards-Helaire.

During his entire college career at LSU, Edwards-Helaire registered 18 total explosive runs of 20 yards or greater on 370 total carries. 16 of those 18 came in the 2019 season. Additionally, Edwards-Helaire’s 18 total explosive runs accounted for 626 (29.8%) of his 2,103 total rushing yards at LSU. That means he averaged 4.2 yards per carry on his other 352 rush attempts.

Interesting enough, Edwards-Helaire didn’t need to break any tackles on eight of these 18 total explosive runs. Over half of them resulted in him not receiving first contact until way past the line of scrimmage.

While Edwards-Helaire did get hawked down from behind on a few of these 18 explosive runs, he did run away from defenders on a few others. He’s not a blazer, however, and his speed is most noticeable once he gets into open space as he’s able to get up to full speed quickly then.

Edwards-Helaire’s running style is somewhat similar to that of Taylor’s. He has similar vision and ability to slide over to a hole or one about to open. Edwards-Helaire is a little shiftier back than Taylor is. Edwards-Helaire’s final two runs in this group of 18 show his level of shiftiness. The one that went for 21 against Clemson late in this past season’s National Championship Game, includes him forcing a miss in the backfield before scampering 21 yards and then falling on purpose in-bounds.

The full contextualization of all 18 of Edwards-Helaire’s explosive college runs are below in addition to a compilation video that includes 17 of the runs. One of the 18 runs couldn’t be located and that one was against Mississippi.