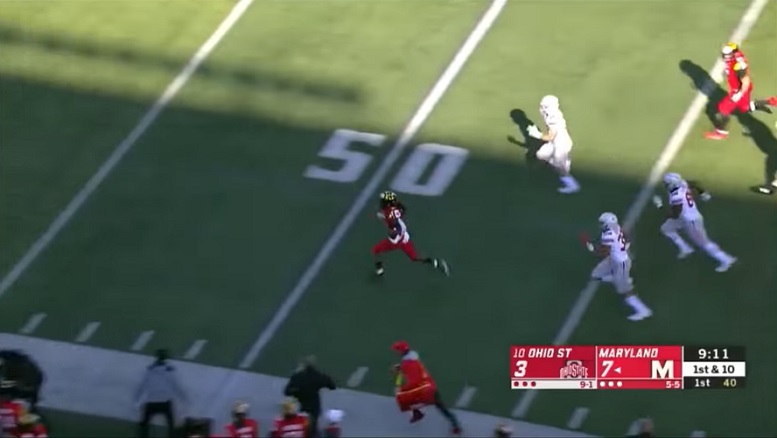 After deciding against selecting a running back with one of their first two selections in the 2020 NFL Draft, the Pittsburgh Steelers addressed the position with their first of two fourth-round selections on Saturday. That selection was Maryland running back Anthony McFarland Jr., who measured in at this year’s scouting combine at 5081, 208-pounds. He also ran his 40-yard dash in 4.44-seconds in Indianapolis, IN. After the draft was over with Saturday night, Steelers general manager Kevin Colbert talked briefly about McFarland.

“With Anthony McFarland Jr., we were able to add a running back that gives us a little change-up characteristic different than the guys we have,” Colbert said. “He has really good vision, one-step cut quickness, and very good finish speed. He’s had a lot of big runs just finding that crease or finding a bounce to the outside where he could finish.”

Steelers running backs coach Eddie Faulkner also talked about what McFarland brings to the team regarding positive attributes when he addressed the media not long after the running back was picked in the fourth-round.

“He is really explosive,” Faulkner said of McFarland. “One game that pops into your head in 2018, they played Ohio State and he rushed for nearly 300 yards in that game. He sees a crease; he has the ability to hit the crease. He gets from zero to 60 really quick. Quickness, speed and has shown the ability to hit the long ball. That is a little bit of a change from what we have. We have those people who are capable of doing it, but when you compare him to the likes of [James] Conner and Benny [Snell], he is a little different as a runner which I think makes us more valuable as a group.”

McFarland did indeed show to be an explosive running back in his two seasons at Maryland on his way to registering 17 runs of 20 yards or longer on his 245 total carries that gained 1,648 yards. Those 17 explosive play runs totaled 726 yards, which is 44.1% of his total college career rushing yards. As Faulkner mentioned Saturday night, McFarland’s big 2018 game against Ohio State included him carrying the football 21 times for 298 yards and two touchdowns. He had runs of 81, 75 and 52 yards in that game as well with the two longer ones ending in touchdowns.

Fortunately, I was able to find all 17 of McFarland’s explosive college runs Saturday night and have since contextualized them all as you can see below. Each play is also linked to in the contextualized data in the table below for all to watch.

The thing that sticks out the most and quickest when watching these 17 explosive runs is that McFarland does indeed hit creases fast and not only that, he gets up to top speed just as quick. Seven of these explosive runs resulted in touchdowns with five of them being 63 or more yards. Six of those seven were against Big Ten teams as well. On eight of these 17 runs there wasn’t any first contact and because of that there are not many broken tackles.

I’m not sure we learned too much about McFarland on these 17 contextualized explosive runs outside of him indeed having long speed and the ability to hit a crease in a hurry. With McFarland now being anointed a change-of-pace running back by the Steelers, he’ll be expected to produce something the team’s offense didn’t get a lot of from that position last season and that’s explosive runs.