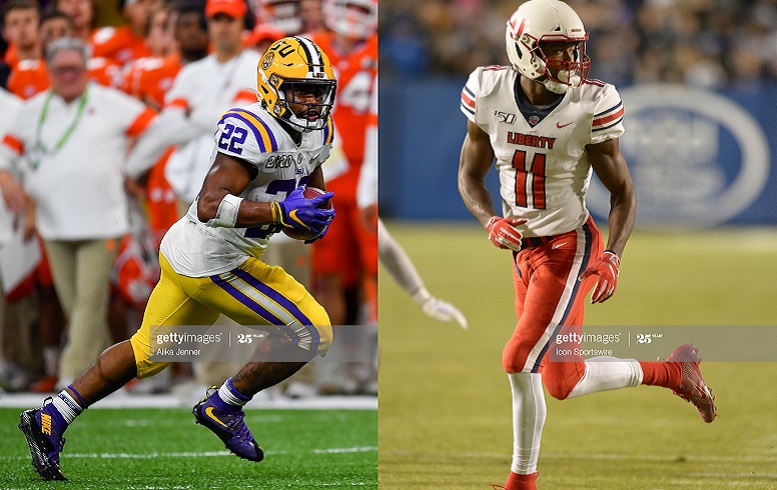 In the third-round of his seven-round mega mock draft, Brugler has the Steelers selecting Liberty wide receiver Antonio Gandy-Golden 102nd overall with their compensatory pick they awarded. Gandy-Golden, who a Senior Bowl participant back in February, measured in at the scouting combine at 6040, 223-pounds and ran his 40-yard-dash in 4.60-seconds. He caught 231 passes for 3,722 yards and 32 touchdowns during his college career at Liberty.

After mocking two offensive players to the Steelers, Brugler has them selecting Oregon linebacker Troy Dye in the fourth-round with the team’s 124th overall pick in the draft. Dye, who backed out of this year’s Senior Bowl after initially accepting an invitation to play in it due to injuries, measured in at this year’s scouting combine at 6032, 231-pounds. He didn’t participate in any drills at the combine because he was still not fully rehabbed. He recorded 391 total tackles, 13 sacks, five interceptions, 14 defensed passes and four forced fumbles during his college career at Oregon.

11 spots later in the fourth-round, Brugler has the Steelers selecting another offensive player and this time it’s Kentucky guard Logan Stenberg at 135th overall. Stenberg, who was also a Senior Bowl participant in February, measured in at the scouting combine at 6060, 317-pounds and ran his 40-yard-dash in 5.30-seconds. He also did 26 reps on the bench at the combine. At Kentucky, Stenberg started 39 consecutive games at left guard.

Brugler has the Steelers finally addressing the defensive lineman the sixth-round at 198th overall with the selection Texas Tech defensive tackle Broderick Washington, who measured in at the combine several weeks ago at 6022, 305-pounds. He did 23 reps on the bench at the combine but nothing else. Washington did participate in both the NFLPA All-Star game as well as the Senior Bowl, where he was added late as an injury replacement. He recorded 134 total tackles, 7.5 sacks and two defensed passes during his college career.

Finally, Brugler has the Steelers selecting an edge-rusher in the seventh-round as he mocked Miami edge Trevon Hill to them at 232nd overall. Hill, who measured in at the scouting combine at 6027, 248-pounds, ran his 40-yard-dash in 4.89-seconds. He was also a Senior Bowl participant earlier in the offseason. After starting his college career at Virginia Tech, Hill was dismissed during the 2018 season for not upholding the standards for student-athletes at the university. He then played for Miami in 2019 as a senior. For his entire college career, Hill registered 121 total tackles, 16 sacks, one interception, two defensed passes and a forced fumble.

Overall, this final full mock by Brugler wasn’t a bad effort at all when it comes to his Steelers selections and especially with him not covering the team on a regular basis and being a major media draftnik. While he does have a few less talked about choices for the Steelers, at least he did address several perceived positional needs. He also did a great job of mocking players who played in All-Star games to the Steelers.