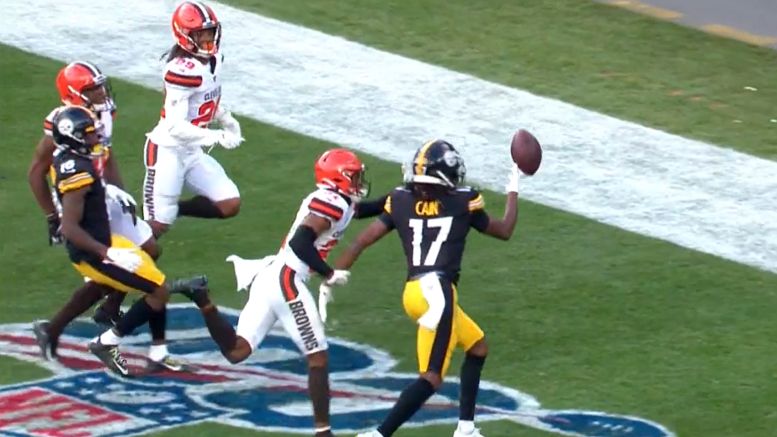 NFL teams start releasing players as soon as they start drafting new ones, pretty much. Perhaps a day or two later. Even the Pittsburgh Steelers announced three cuts on the final day of the draft after they signed three more college free agents than they could fit on the 90-man roster. But that’s not the only reason players get cut.

When you add depth to a position, especially when you do so with a premium draft pick, the players at the lower end of the depth chart instantly become less valuable, less likely to make an impact or to be on the team, and more likely to find himself looking for work in short order.

With the Steelers using their top draft choice on bit 6’4” wide receiver Chase Claypool, then, some attention has been paid to the other 6’4” wide receiver who was on the team’s roster a year ago, at least for the final six weeks, that being Deon Cain, who despite having a small impact was able to become something of a fan favorite.

Bill Barnwell yesterday elected him as the player most likely to be traded or released as a result of the 2020 NFL Draft, a not unreasonable conclusion given the circumstances. He was even the first player whom I chose to highlight in my stock watch column following the second day of the draft.

“After drafting 6-foot-4 wideout Chase Claypool in Round 2 and running back Anthony McFarland Jr. on Day 3, the Steelers have too many wide receivers and too many backs”, he writes. “There are questions about the futures of the guys atop those respective depth charts, but I’m not projecting trades for James Conner or JuJu Smith-Schuster here”.

I think he does make an important point here. Not only does Claypool factor here, but also McFarland. With his drafting, it significantly increases the likelihood that the Steelers carry four running backs, which means one less roster spot elsewhere, and especially if there is a running back special teamer, they could come at wide receiver, carrying only five.

“More realistically, it’s tough to see a path to a roster spot for Cain”, he went on, noting that he “doesn’t play special teams and isn’t going to stick on the roster ahead of Claypool, Smith-Schuster, James Washington or Diontae Johnson. Cain is likely competing with slot receiver Ryan Switzer, who caught just eight passes over nine games last season, for a place on the team”.

Switzer, however, is special teams-capable as a return man (whether you think he should be used there or not; that is a fact and one the Steelers will take into account), and his body type and skill set are less redundant on the current 90-man roster than is Cain’s. in fact, the team has several wide receivers who are 6’2” or taller now, including Amara Darboh and Saeed Blacknail.