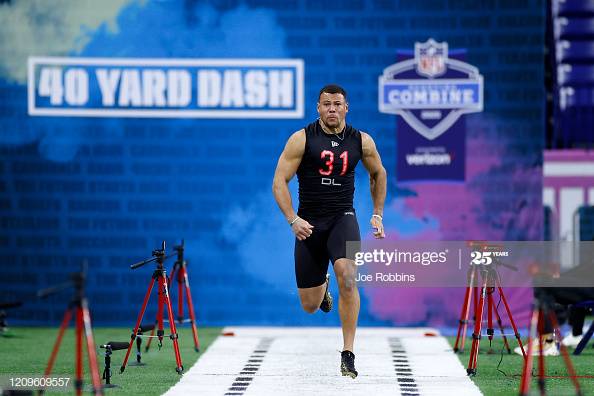 With their second selection of the 2020 NFL Draft, the Pittsburgh Steelers selected Charlotte pass rusher Alex Highsmith. With T.J. Watt and Bud Dupree stationed ahead of him on the depth chart, Highsmith is not coming in to start but instead to work. He will have to work and earn each and every snap. Though for the former Charlotte pass rusher, work has not been a challenge, it has been second nature.

Like a shadow following him around, the necessity to work has tagged along with Highsmith dating back to his high school days. Near the end of his high school career, just a few schools showed interest. He eventually decided to walk on at Charlotte.

It was here at Charlotte that Highsmith would have to work and he wasted no time getting to work. He redshirted his first season in 2015 and year by year his numbers began to trickle up. In 2016, he notched just one sack. In 2017, he increased this number slightly, recording two sacks but it was in 2018 when it was evident that sooner or later nothing was going to hold Highsmith back.

“I remember coming in as a walk-on and coming after training camp. I came in and did what I could for the scout team that first year. I worked my butt off and eventually became a part of the rotation. During my freshman and sophomore years I played on special teams, so I think that’s what a lot of coaches will like I about. The spring of 2018 was when my game went to the next level,” Highsmith told Chris Rosvoglou of The Spun.

In 2018, Highsmith enjoyed a breakout season as he set a school record with 18.5 tackles for a loss, though this record would not stand for long. It takes a great player to set records but it takes a special player to then break his own record. That is exactly what the Charlotte pass rusher did in 2019, registering 21.5 tackles for a loss and 15 sacks.

By now, Highsmith was no longer just a small school stud. He was garnering attention from the highest ranks that the NCAA had to offer. By September 2019, Clemson began to take notice as Dabo Swinney sung the praises of the Charlotte pass rusher.

“They probably have the best player that we’ve seen to this point in that No. 5 (Highsmith). He’s on all the ‘great player’ lists. I kept watching him and going, ‘Holy cow.’ He looks like Xavier Thomas. He’s physical, fast, disruptive. He’s causing sacks and tips. Really, really good football player. That No. 5 could play for anybody in the country,” Swinney said shortly before a matchup between Clemson and Charlotte.

Swinney was not the only one from Clemson who would be impressed by Highsmith’s ability. After recording one sack and one tackle for a loss, the pass rusher had now also caught the attention of Clemson’s left tackle Jackson Carman.

“He was a dude. I’ve been playing football for 12 years and he’s by far the fastest off the ball I’ve ever gone against. Ever,” Carman told The State following their matchup.

After a dominant senior season, Highsmith earned an invite to the Shrine Bowl and he continued to impress during the pre-draft process. After seeing the destruction caused by Highsmith, Steelers coach Mike Tomlin and the front office went ahead and added him with their third-round selection.

Alex Highsmith said during his conversation with Coach Tomlin and Kevin Colbert it seemed like he'd be a special teams guy in 2020 and back-up T.J. Watt and Bud Dupree.

The newest Steelers’ outside linebacker noted shortly after being drafted that it seemed like he would be a special teams contributor in 2020 while also backing up Watt and Dupree. For Highsmith, this should not be a worry for it is just another opportunity for him to do what he does best – work.