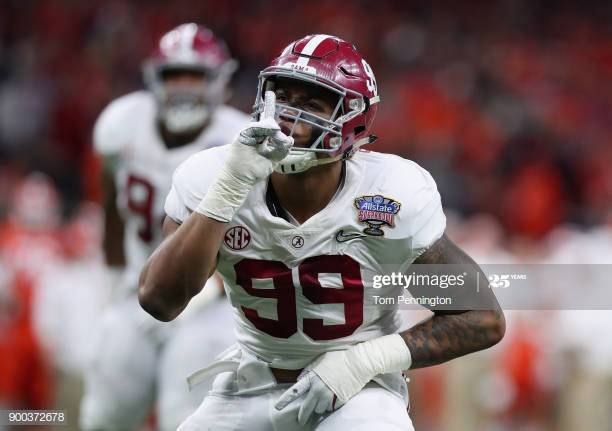 The Covid-19 pandemic has made this offseason much different from those of the past. Ordinarily, the Pittsburgh Steelers would be all over the Pro Day circuit, with head coach Mike Tomlin and general manager Kevin Colbert personally being in attendance at any number of them.

One of the annual must-attend Pro Days for the duo has been Alabama, understandably, as they are typically one of the top two or three teams in all of college football, and routinely pump out NFL-ready talent. The Steelers haven’t often gone to their well, though they have a few Alabama players on the current roster (Minkah Fitzpatrick, Isaiah Buggs, and J.C. Hassenauer).

They have, however, drafted an Alabama lineman in two straight years. That has a lot to do with the fact that their defensive line coach since 2018, Karl Dunbar, spent two years training their defensive linemen before the Steelers hired him. Buggs was a sixth-round pick in 2019. Before him was Joshua Frazier in the seventh round, though he has since retired.

Can they make it three Alabama linemen drafted in as many years? Raekwon Davis certainly wouldn’t mind. He would fill a need as a nose tackle who can play the three-technique, and would fall into that middle round range. The Steelers had an informal meeting with him at the Combine, about as extensive an interaction they would have been able to have with him.

“Karl Dunbar, he’s like an old-school guy and he has old-school technique. I learned a lot from Karl Dunbar”, Davis told reporters at the Combine. “Being at Alabama for four years, I played a whole bunch of spots, so it got me prepared, so whatever the NFL thinks I do best, I know I can be comfortable and play there”.

When Pittsburgh does get a coach who had just worked at the college level, it’s not uncommon for them to bring in players whom that coach worked with directly. Drafting a third player that Dunbar has coached, however, would be seemingly unprecedented.

Still, there is a clear and definite need for a defensive tackle after the Steelers lost Javon Hargrave in free agency. A rookie taken in the middle rounds could even end up being the ‘starter’ at that position, as far as it is a starting role.

The only true defensive tackle currently on the roster is Daniel McCullers, who has been a career reserve, sometimes even a healthy scratch. Buggs, Tyson Alualu, and Chris Wormley all could be considered possibilities to shift inside some barring the failure to draft somebody who can come in and play, but one gets the sense that they would really like to add somebody to the mix.