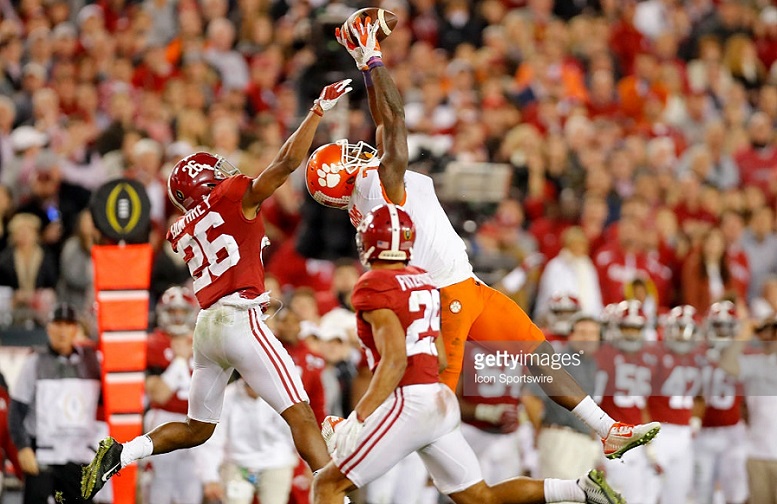 With the present currently locked down and the future put on hold due to the COVID-19 outbreak, many sports analysts have found themselves with only one place to look – the past. And with the 2020 NFL Draft approaching, one fun exercise many have dabbled in are draft do-overs in which drafts from the past are analyzed and re-selected. NFL.com’s Adam Rank put together a 2017 draft do-over and the Pittsburgh Steelers were able to grab a former top ten pick with their first selection.

“The Steelers really did have a great draft in real life, with Watt and JuJu. And while they’re deprived of both in our imaginary draft, I think it would be pretty fun to see what Mike Williams could do opposite Antonio Brown in this offense. My conjecture would be that Williams would become a touchdown machine for sure, similar to what he did in Los Angeles in 2018, when he reached the paint 10 times.”

Injuries have been a factor in Williams’ early career, especially during his rookie season as back and knee injuries limited him to just 10 games. Since then the 6’4 receiver has broken out in a big way. The former Clemson receiver scored 10 touchdowns in 2018 and put together the first 1000-yard season of his career in 2019.

A Steelers offense becomes very lethal on paper in the imaginary circumstance that Williams falls into the Steelers lap at #30 but perhaps the bigger story revolves around two of the Steelers’ original selections from 2017 that went in the first round of Rank’s do-over.

T.J. Watt, the team’s original selection at #30 cracks the top ten as Rank has the Pro Bowl outside linebacker going at #9 to the Cincinnati Bengals. What a frightening sight that would be having to deal with Watt twice a year as he causes chaos for a divisional rival. Interesting enough, Watt is also the first edge rusher off the board in this do-over as first overall pick Myles Garrett goes 12th overall.

Pittsburgh’s second round selection, JuJu Smith-Schuster also goes in the first round as Rank has him slotted in at #24 to the Oakland Raiders. Smith-Schuster is the fourth wide receiver off the board going after the likes of Chris Godwin, Cooper Kupp and Kenny Golladay.

While these draft do-overs offer no real significance to the current movement of the NFL, they are an amusing exercise when it comes to grading one team’s draft class. Based off how Rank’s do-over played out, it is easy to say that Steelers’ general manager Kevin Colbert hit it out of the park in the 2017 draft.