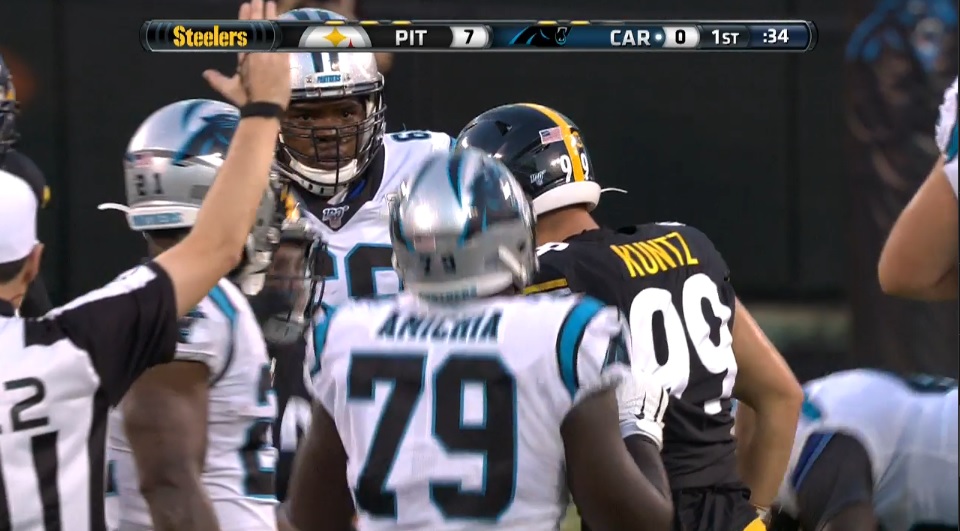 Kuntz is a relatively familiar face to this list. He’s back around for another cup of coffee with the team after spending part of the preseason, briefly, in 2019.

He was signed the day before the final Latrobe practice. An OLB by trade, he taught himself how to long snap in the interest of making him more marketable and I’m betting that at least factored into why the Steelers came calling. With depth thin at EDGE, he was thrown into team drills the first day – normally, players take a day or two before getting tossed into the fire like that – and wound up playing significant snaps in the preseason. That included 18 snaps in Week 2 of the preseason against the Kansas City Chiefs, three days after getting signed.

He notched his first sack in the preseason finale, taking advantage of blanketed coverage to spin down Will Grier against Carolina.

But it wasn’t enough, and he probably knew that, getting cut at the end of the preseason and wasn’t added to the practice squad. He was picked up by the XFL’s Dallas Renegades and spent the first five weeks with them before the league came to a screeching halt. They were courteous enough to allow their players to explore NFL opportunities, changing course after barring players from signing during the season.

Assuming there is a second trip to Latrobe, Kuntz won’t be as wide-eyed as he was before. And he’ll be prepared heading into the offseason as opposed to getting signed mid-way through preseason and trying to hop on a moving train. He cited that in an interview with The Trib’s Chuck Curti late last month.

“Having been in (Steelers) camp and getting to know the coaches and know some of the plays, playing in the preseason, that’s a big advantage now going into this second signing.”

His path to making the roster still seems difficult and that’s being generous. Outside linebacker depth isn’t great but Pittsburgh seems likely to add another one throughout the draft. And long snapper? Unless Kameron Canaday implodes or gets hurt, he’s not making it there either.