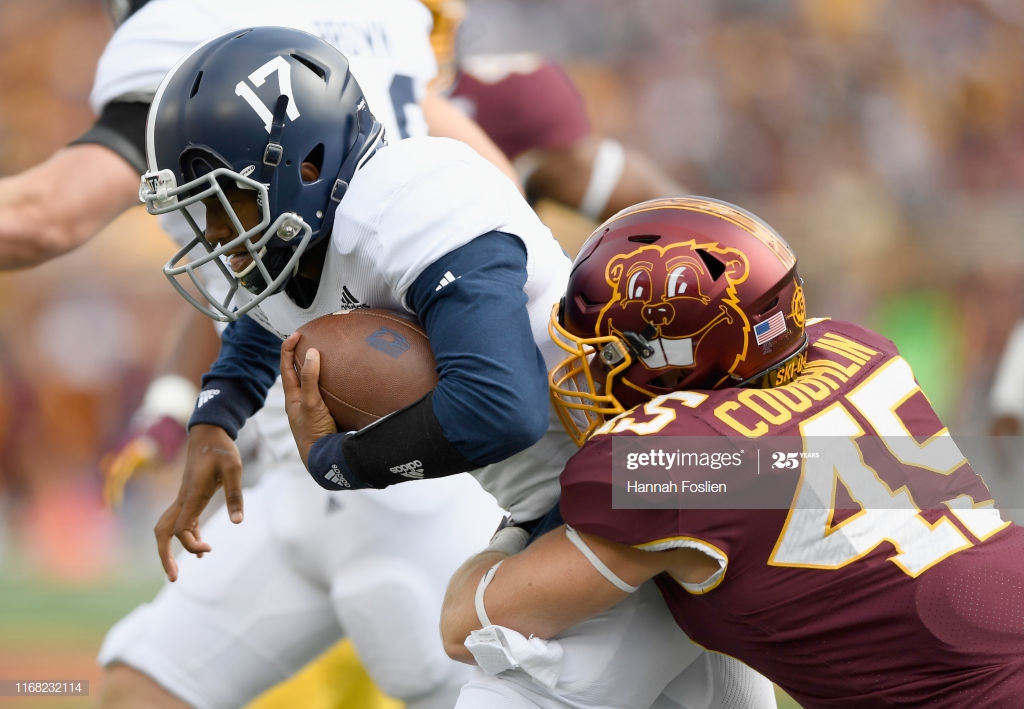 -Uber-productive edge defender throughout career against the run and pass
-Powerful first punch to stun blockers
-Shows ability to convert speed to power with efficiency
-Motor runs hot; high-energy, high-effort defender
-Diagnoses well against the run and sheds to make plays along the LOS
-Comfortable dropping into space and gets adequate depth in drop

-A tad undersized as an EDGE defender, in terms of length
-Play strength varies snap-to-snap, leaves you wanting more in certain situations
-Not much of a nuanced plan rushing the passer
-Lacks any sort of counter to initial rush
-Labors to change directions in space
-Range and overall athleticism are lacking
-Struggles to bend around edge; winds up slip and falling a lot during dip

-Three-time Academic All-Big ten at Minnesota (2017-2019)
-Named All-Big Ten Second Team in 2018 and 2019
-Finished four-year career with 159 tackles, 40 tackles for loss, 22.5 sacks, seven forced fumbles and one fumble recovery
-Sits fourth all-time in school history in TFL and third all-time in sacks
-Finished senior campaign with 49 tackles, 9.5 TFL, 4.5 sacks and two forced fumbles
-Father and Grandfather both played at Minnesota, with Grandfather Tom named the 1959 Minnesota team MVP
-Competed in the 2020 Senior Bowl
-Invited to the 2020 NFL Scouting Combine, where he clocked a 4.57 40-yard dash, a 36-inch vertical, and a 126-inch broad jump

Minnesota EDGE defender Carter Coughlin falls into that category of “one year too late” for me.

Coming off of a terrific junior season in 2018, I thought Coughlin should have come out. Instead, the Minnesota man through and through heard his calling to return to the Gophers for 2019.

While the team had more success, Coughlin’s numbers fell off a bit, dropping him down draft boards.

He’s a sneaky-good EDGE to take a flier on late in the draft, but he’s not an early-impact defender like I thought he could have been in 2018.

Against Purdue in 2019, Coughlin was all over the place. He varied his rush speeds, flashed some quick hands, and applied a ton of pressure overall. You can see the experience and the variety to his rush speed, but he struggles to turn the corner completely, as you can see here.

You can see right away he’s a good straight-line athlete. That was evident on film and evident at the combine.

He’s a smart player with good awareness and reactionary attributes. You can see the athleticism here with Coughlin.

The problem I have with Coughlin is his lack of a rush plan. He relies heavily on first-step quickness to beat less athletic tackles, but when that first step doesn’t win he is inconsistent converting speed to power and really doesn’t have any sort of go-to rush move or counters. Often, you see what happens above, with him getting washed out of the rush.

His change-of-direction skills are really rough. He’s a much better athlete when it comes to testing, but when he’s in pads and moving in a straight line, he really labors to open his hips and change directions.

Add in the poor angle to the quarterback in the pocket here, and it results in six points.

Coughlin’s calling card early on will be his run defense. He has powerful hands when lined up along the line of scrimmage. He uncoils his power well through his hands into the defender, stunning him.

Following the powerful punch he’s able to stack and shed, making a play on the ball carrier near the line of scrimmage.

Overall, I think Coughlin has some traits to work with as an EDGE defender in a 3-4 system. He can drop into coverage and put up adequate reps, plays the run well and flashes the ability to apply pressure on the quarterback.

The production overall is hard to overlook with Coughlin. He comes from a football family and is a relentless defender. He seems like a good bottom of the roster depth piece.