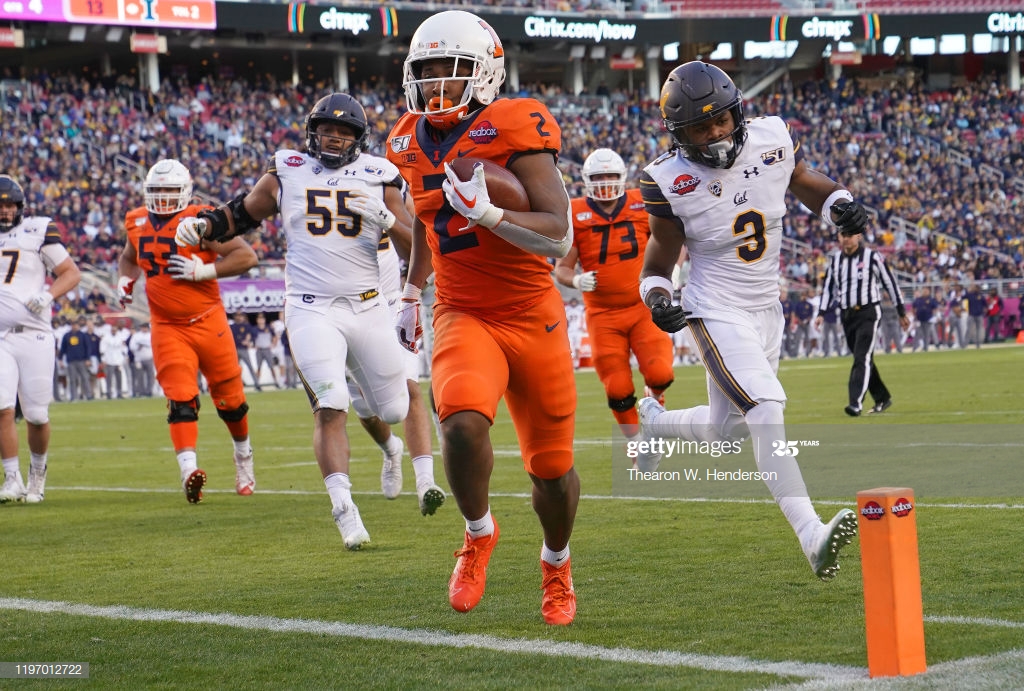 -Limited production as a receiver with inconsistent hands
-Lacks overall mass to hold up as between-the-tackles runner
-Not overly powerful as a runner and leaves himself to some big shots with upright running style
-Despite willingness, doesn’t have strength to hold up in pass pro consistently at the next level

-Played in 44 career games with Illinois, starting 22
-Finished career with 375 carries for 2,361 yards and 18 touchdowns; added 38 receptions for 343 yards through the air
-Recorded 10 plays of more than 50 yards in his career
-Named Red Grange Outstanding Offensive Player of the Year for Illinois in 2018
-18th running back in Illinois history to rush for 2,000 yards in his career
-Competed in the 2020 East-West Shrine Bowl Game

In a deep running back class full of home run hitters, Illinois star Reggie Corbin is flying under the radar despite putting up some absurd numbers in a rebuilding program.

Corbin’s tape is electrifying, thanks to his game-breaking ability and his impressive elusiveness.

Corbin first came to my attention last season against Penn State in a Friday night showdown on ESPN. Corbin lit up the Nittany Lions that night.

Check out this run. You can see the lateral elusiveness and explosion to erase angles. He puts his foot in the ground and just explodes. Fun to watch.

Corbin just absolutely glides on film. Like I said, once he sticks his foot in the ground, he explodes upfield. Arm tackles in space aren’t going to slow this guy down either.

I get serious Darren Sproles vibes with Corbin as a runner. He varies his pace and tempo on the ground to rock defenders to sleep, especially working laterally.

Once he bursts outside here, you can see him slow up as the defender closes in before then finding another gear to slip around the defender. Angles don’t really exist against Corbin.

I am a big fan of Corbin’s footwork. He’s so quick and efficient and sets defenders up so well in space. This should have been a short gain, but he has the pace and elusiveness to set the Wisconsin linebacker up in the hole and then the explosiveness to get north in a flash.

Corbin can really thrive in a one-cut system where he can get north in a hurry and hit home runs.

Once the football is in his hands he’s a threat to put six on the board constantly. He didn’t have the testing numbers to open eyes, but once the pads are on he runs away from defenders.

Overall, I am concerned with his lack of production and usage as a receiver, and he’s simply not good enough to stay on the field in passing situations as a pass protector. However, in a RB by committee room, he could be a legit game-breaker who will make defenders miss and rip off runs in chunks.