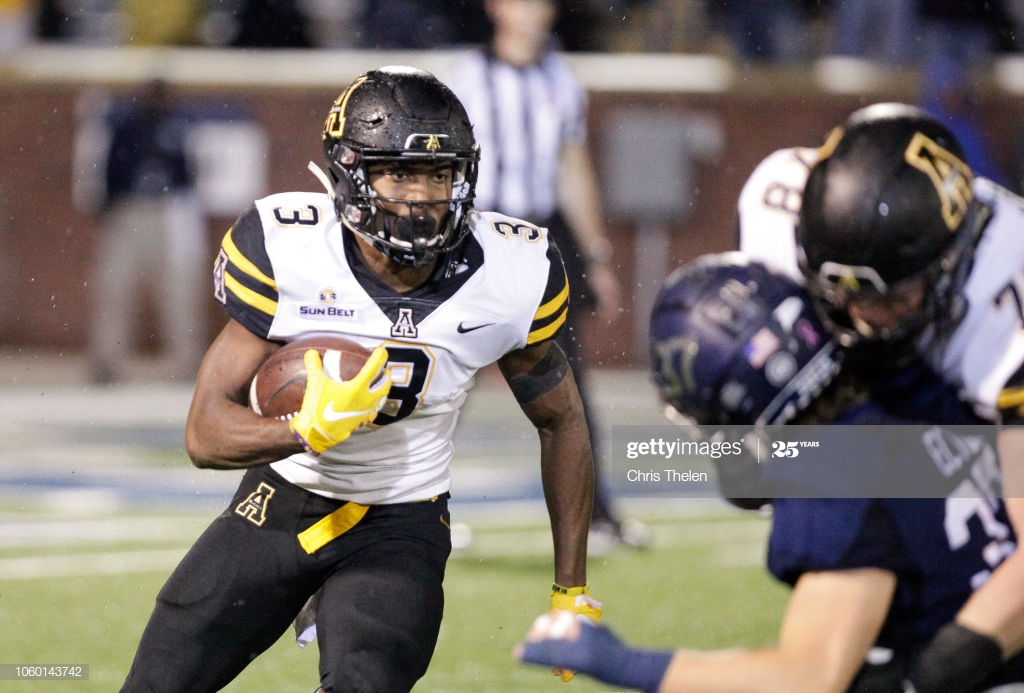 – Excellent straight line speed and burst, threat in the open field and timed like it (4.41 40)
– Effective one-cut runner, decisive and gets downhill quickly with acceleration to hit the hole
– Doesn’t try to dance and make plays that aren’t there, gets shoulders square and picks his lane
– Good lateral mobility and change of direction, able to make defenders miss in space
– Speed to run away from third level defenders
– Shows leg drive and tries to finish runs
– Saw limited work as a receiver but shows good hands and ability to adjust to balls thrown outside his frame
– Good ball security and didn’t seem to have any fumbling/carriage issues
– Good level of production but doesn’t have a ton of mileage either
– Capable of being “the guy,” workhorse back consistently during final season
– Excellent kick return value with ability to house the ball

– Average frame without much bulk
– Lacks power and goes down too easily on contact, doesn’t break many tackles
– Struggles more in short-yardage situations
– Poor pass protector who largely shies away from contact and lacks size to anchor against blitzing linebackers, often used in routes to mitigate chances he had to protect
– Not used often as a receiver despite being an every-down player
– Didn’t see many instances of him being split out and moved around the formation
– Obvious competition concerns, didn’t play against elite defenses and average dipped against P5 schools (3.9 YPC against UNC and South Carolina in 2019)
– Not a ton of starting experience

– 1.5 years as the starter, left school as redshirt junior
– Career: 482 carries, 2884 yards (6.0 YPC) 25 TDs, 39 receptions
– Three career KR touchdowns, 25.7 average on 56 attempts
– Named Sun Belt MVP in 2019 and MVP of Conference Championship Game and Bowl Game
– Two-star recruit out of HS, chose App State over Georgia Southern, Army, and Kent State among several others
– Missed all of 2017 with knee injury (muscle injury on back of knee due to a cyst), missed six games in high school due to injury, suffered broken hand junior season that caused him to miss three games

Added Evans to my list after learning the Steelers had a FaceTime interview with him. So a dude worth checking out. There’s no doubt Evans would be a different type of back on the roster, someone with serious speed who can win in the open field. Like this run down the left sideline.

Evans is a one-cut runner who fits best in a zone scheme. Take three steps, make a decision, and get downhill. He has good lateral agility and change of direction.

Evans has two problems though. He’s definitely lacking power. Doesn’t break a lot of tackles, doesn’t show much contact balance, and goes down too easy.

And he’s pretty woeful in pass protection. Not a ton of examples of it but he likes to turn away and lacks the size and bulk to pick up LBs in the A gap. He was an every-down guy at school but it’ll be a much more difficult challenge on Sundays.

Evans would be a breath of fresh air on the roster because he isn’t a 225 pound back who plods along. But he has a ceiling as well. Like I said, he fits in an inside zone heavy scheme with a back who can pass protect and supplant him on 3rd down.

My NFL comp is Tevin Coleman though his floor is something akin to Jordan Todman.

Games Watched: vs Middle Tennessee State (2018), at UNC, at South Carolina, vs UAB