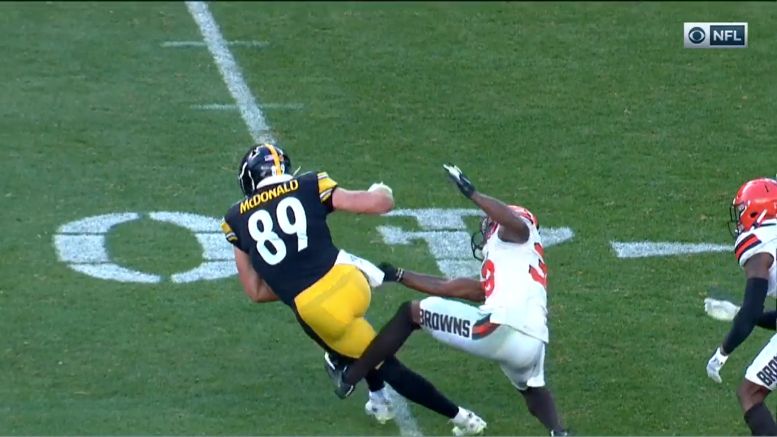 A few days ago, we weren’t entirely sure whether or not Vance McDonald was going to be a part of the Pittsburgh Steelers in 2020. A week ago, it was even more uncertain when the status of the Collective Bargaining Agreement remained up in the air. But the team left virtually no doubt what their intentions are with him after they restructured his 2020 base salary, converting it to a guaranteed signing bonus, in order to create salary cap space.

While it doesn’t necessarily have to be the case, it is almost universally the case that teams choose to renegotiate the contracts of players in whom they have a high degree of confidence are going to be a part of the team.

McDonald was expecting a career year out of himself and the team in 2019. It’s fair to say neither of those things happened. But he also allows himself to acknowledge how big of a factor the loss of Ben Roethlisberger was in everything about last season.

“I go back and evaluate my season like, there is no Ben Roethlisberger in the backfield’”, he told Missi Matthews. “And that’s not a shock at Duck or Mason. It just is what it is. I go back, I think about individual plays. Obviously all the bad ones are the first ones that come to mind, and wishing that you had them back”.

While the quality of play from the quarterback position while Mason Rudolph and Devlin Hodges were under center is obviously a part of the conversation, that could hardly account for the fact that he averaged just 7.2 yards per reception in 2019, or was credited with forcing only one missed tackle after breaking 10 the year before.

”Seven years in, I think of the lessons I learned in being traded and  being in that position and identifying the things that make the Steelers organization really great and wonderful”, a reflective McDonald said. “Again, it’s just that consistency, that commitment to each other, of ‘we’re gonna stick with the guys that we have and we’re gonna work from within’, and maintain, appreciate the value of who we hire and things like that. That’s such a great thing to be a part of”.

Of course, it doesn’t always work out with such loyalty. Just ask Mark Barron, Jon Bostic, Donte Moncrief, Ladarius Green, and Morgan Burnett, all of whom signed multi-year deals as outside free agents and were released a year later. McDonald was also an outside player, acquired via trade in August of 2017, and his contract is one the team could get out of if they wanted to.

After catching just 38 passes for 273 yards and three touchdowns in 2019, everyone expects a lot more out of McDonald in 2020, including himself. Hopefully a healthy Roethlisberger—and a healthy McDonald—will go a long way toward achieving that end.