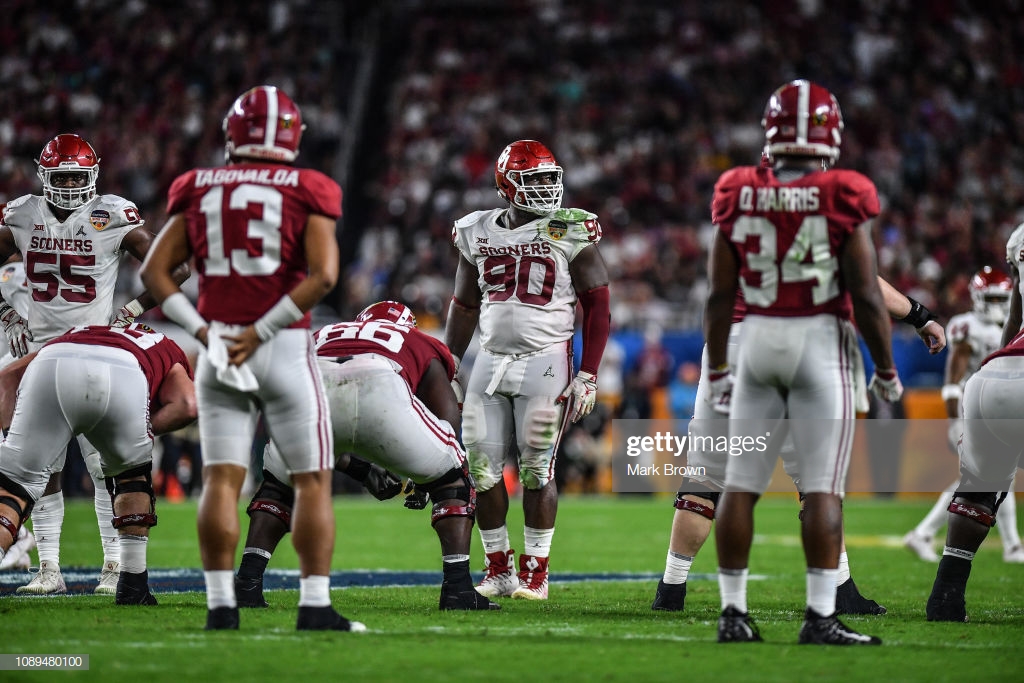 Well, the dark ages are now upon us. Coronavirus has swept the world, leaving us without sports which has caused people like me to have a lot of extra time on my hands. The NBA, NHL and MLB are just some of the major sports that have halted but one event that continues to surge ahead is NFL Draft speculation.

While I typically piece together just one mock draft a year, I thought I’d give it a stab earlier than usual this year. The Pittsburgh Steelers could potentially have more than a few holes to plug depending on how the CBA and their cap situation goes. I have tried to address as many of their needs, whether it be urgent or just depth as much as possible with this draft. As a reminder, this is just my first go at it and a lot can change between now and the end of the April.

Make sure to tell which picks you enjoyed and which picks made you stare at your screen in bewilderment.

It is almost certain that the Steelers will waive goodbye to defensive tackle Javon Hargrave this offseason. Hargrave has been a great and underrated defensive tackle for the team over the last four seasons but the truth is that Hargrave is going to break the bank in free agency and the Steelers simply do not have the money to bring him back.

Luckily, the team will not have to wait very long to find his replacement as with their first pick of the 2020 NFL Draft, they select Oklahoma defensive lineman Neville Gallimore. The Oklahoma defensive tackle shined at the Senior Bowl just a few months ago and the Steelers typically select a few players that were down in Mobile each year. With Gallimore, the team’s defensive line will be getting an experienced player that should be able to see the field immediately. The Canadian defensive tackle has made 27 starts and recorded seven sacks over his last two seasons.

If you believe the Steelers’ front office, the team seems committed on bringing back pass rusher Bud Dupree back for at least another season. While that may make this next selection a little surprising, let’s not forget that the team lacks some serious depth behind him. The selection of Boise State edge rusher Curtis Weaver not only gives the team a capable back up option should the team cut Anthony Chickillo, which more than likely will happen, but it also gives the team a suitable replacement in the near future if they cannot come to a long term extension with Dupree this offseason (assuming he is franchise tagged).

Where there is smoke, there is usually fire and the Steelers have already had some contact with the Boise State pass rusher. The two sides had a formal meeting at last month’s NFL Combine and they were allegedly due to have a visit planned, though those plans were likely foiled with the NFL’s coronavirus response. Weaver’s body and athleticism may not be off the charts but he has good burst off the snap and shows evidence of winning off the edge. He may need a year or so of development but he will get exactly that in Pittsburgh.

It feels unusual to state that the Steelers may have a huge need among their offensive line but that could very well be the situation the team finds themselves in. Ramon Foster very well could be a cap casualty and there is doubt over whether the team will be able to afford B.J. Finney or whether they have interest in bringing him back. That leaves a huge hole among the interior offensive line but with their third selection of the draft, the team goes out and grab a tough-nosed guard in Ben Bredeson.

Bredeson is a four-year starter who has been the heart and soul of the Michigan offensive line since his arrival at the Big-Ten school. He has made 46 starts over the last four years and could potentially compete for a starting role immediately in Pittsburgh. Bredeson has also been named team captain over each of his last two seasons at Michigan and you just know that his character will fit right in with the Steelers’ offensive line. A big-bodied run blocker, the Michigan left guard is exactly what this black and gold team needs.

It is a deep receiving class and the Steelers decide to dip into the class with their second selection of the fourth round, taking SMU receiver James Proche. The SMU receiver makes sense for an abundance of reasons.

First and foremost, Proche is perhaps one of the better slot options in this year’s class and shows good ability to work over the middle of the field, an area where the Steelers really struggled last season. The Ryan Switzer slot experiment just has not worked out as his limitations accumulating yards after the catch really reared its ugly head last season. Thankfully, Proche would be a massive upgrade in this role as his route running talent and ability to generate yards after the catch should be a massive improvement. The SMU receiver caught 111 balls for 1225 yards last season and also comes with incredibly strong hands. Add in his special teams’ experience as a punt return and the Steelers are getting a player that can help in a variety of ways.

If you were to ask me for one player at the Senior Bowl who just felt destined to become a Pittsburgh Steeler, I would have to say Cal linebacker Evan Weaver fits the bill. Weaver is perhaps one of the smartest linebackers in this year’s class, both on and off the field. He is very instinctive and is a film junkie. That is all reflected in his play as he has recorded a career total of 412 tackles. He is also coming off a record-breaking senior season in which he recorded 182 tackles, both a Cal and Pac-12 record.

Weaver does have his struggles in coverage but this will not be the role that the Steelers will require from him. The Cal linebacker would be the perfect replacement for Tyler Matakevich should he also walk in free agency. Weaver can develop and be a great depth option while still seeing the field in a special teams role.

The only conflict I have with this selection is if Weaver will last until the sixth round. He might due to his athletic limitations but with his sure proof tackling and football IQ, this might be wishful thinking.

With their final pick of the 2020 NFL Draft, the Steelers address their safety depth and select Clemson safety Tanner Muse. He may not have the range to be a sideline to sideline safety but he has a knack for the football, recording seven career interceptions. With his size (6’2, 227 lbs), he can also creep down into the box and contribute in run support as well.

Mike Tomlin and Kevin Colbert were both in attendance at his Pro Day and it was later revealed that they dined with the Clemson safety also, meaning that there could be some genuine interest.

You may still be scrolling or going over my selections wondering why there is no tight end selection. It is a valid concern but once again, this is just my first attempt. Perhaps the Steelers roll the dice on another year of Vance McDonald, hoping that the return of Ben Roethlisberger will return him to his 2018-form.

When it is all said in done, the Steelers address their needs on the defensive line and offensive line while also bolstering their depth at the outside linebacker, middle linebacker and safety position.

As always, make sure to leave your thoughts below.