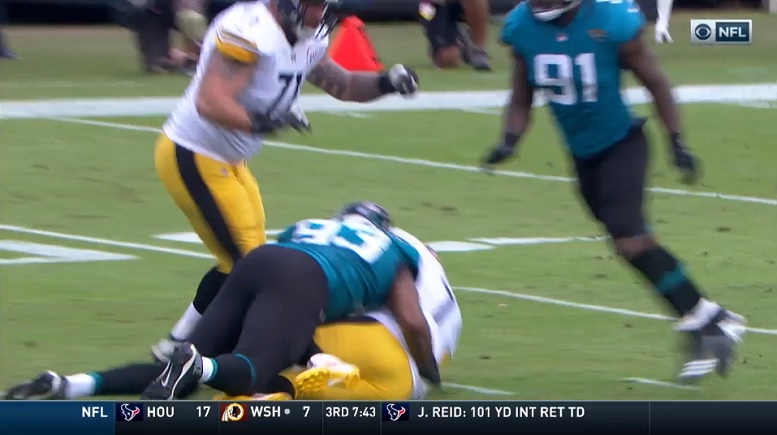 Pro Bowl defensive end Calais Campbell will officially soon be a member of the the Baltimore Ravens.

According to Adam Schefter of ESPN on Sunday, the Jacksonville Jaguars have agreed to trade Campbell to the Ravens in exchange for a 2020 fifth-round pick. That trade will likely be made official after the start of the 2020 NFL league year.

The Steelers were already scheduled to face Campbell once this season as they will play the Jaguars in Jacksonville on a yet-to-be-determined date. They’ll now presumably play against Campbell twice in 2020 now that he’s set to become a member of the Ravens.

Campbell, who was originally selected by the Arizona Cardinals in the second-round of the 2008 NFL Draft out of Miami, will turn 34 years of age just prior to the 2020 regular season getting underway. He’s due $15 million in salary in 2020, the final year of the four-year, $60 million contract he signed with the Jaguars in March of 2017. The Ravens will reportedly take on all of that $15 million salary as part of the deal and then try to work out an extension with the player.

The #Ravens and new DL Calais Campbell are finalizing a 2-year new deal for $27M, sources say. It gives him $20 guaranteed after the trade from the #Jaguars. It’s not completely done yet, but sounds like it will be.

The Jaguars are obviously making a youth movement this offseason and wanted to get as much for Campbell as they could prior to the draft. Campbell’s age and final season scheduled $15 million earnings in 2020 is likely what prevented the Jaguars from getting more than a fifth-round selection via a trade.

The Jaguars have already previously agreed to trade cornerback A.J. Bouye to the Denver Broncos for a fourth-round selection in this year’s NFL draft. Additionally, while the Jaguars did recently place the franchise tag on defensive end Yannick Ngakoue, speculation is heavy that they will try to trade him as well prior to this year’s draft.