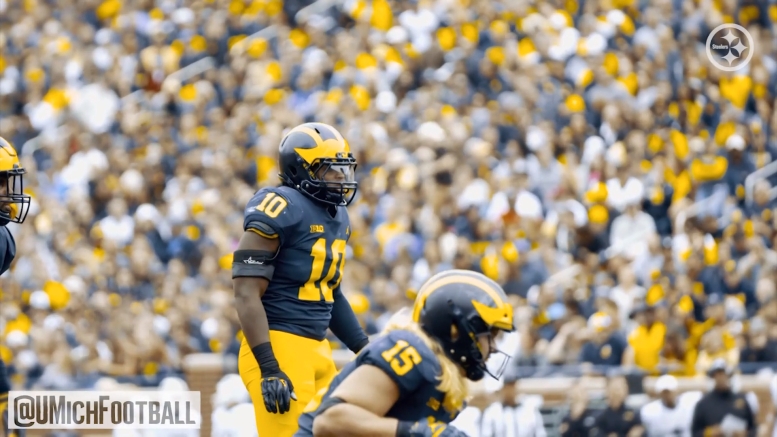 There are some draft picks who have such an influence right off the bat that they can even help sway their team toward drafting some of their former college teammates. The Pittsburgh Steelers were willing to heed the advice of center Maurkice Pouncey, their 2010 first-round Pro Bowl center, after his excellent rookie season.

They would go on to draft his close friend and fellow Gator starting offensive lineman, Marcus Gilbert, in the second round in 2011. Gilbert would spend the next eight seasons, more or less, as the Steelers’ starting right tackle. The team would also draft another friend, Chris Rainey, though his time in Pittsburgh was limited to just one season due to an off-field incident.

Could Devin Bush be the next ‘influential’ draft pick? The Steelers went all in to get him last year, trading up from 20 to 10 in the first round and giving up second- and third-round draft picks along the way. He was a plug-and-play starter and a Pro Bowl alternate, posting over 100 tackles, a forced fumble, two interceptions, a sack, and four fumble recoveries, with one touchdown.

The Pittsburgh Post-Gazette spoke to several of Bush’s former teammates at Michigan as they worked out at the NFL Scouting Combine, embarking on their own professional careers, about whether or not they had spoken to Bush about his experiences in the NFL and about coming to Pittsburgh.

Said safety Josh Metellus, “I already know it would be amazing to play with him at the next level. To go 10 to 12 years, back-to-back-to-back, playing with each other? That would be amazing. But at the end of the day, it’s whoever wants me, and if it just happens to be the Steelers, I’m all for it”. He and Bush grew up together, and then went to college together (Bush declared early as a true junior, while Metellus is projected to be a late-round pick).

The Steelers do just so happen to be in need of some safety depth. Outside of starters Terrell Edmunds and Minkah Fitzpatrick, they have only Jordan Dangerfield and Marcus Allen. Sean Davis is expected to leave in free agency, and Kameron Kelly got himself arrested and released late last season.

Josh Uche is an edge defender out of Michigan who is also coming out for this draft, declaring as a redshirt junior after one season of starting experience. He told Brian Batko that he spoke to the Steelers at the Combine.

“We talked about Devin Bush a little bit, just his style of play, and also what they look for out of their linebackers, as well as what they look for in the future”, he said of that conversation. “Who wouldn’t want to play for such an amazing organization like that? Play with my boy D-Bush and wreak havoc, that’d be awesome”.