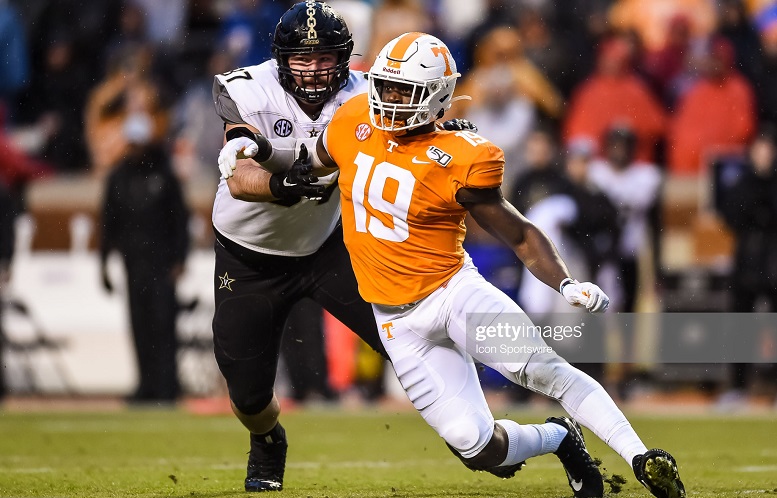 Tennessee edge-rusher Darrell Taylor reportedly had a formal meeting with the Pittsburgh Steelers at the 2020 NFL Scouting Combine in Indianapolis, IN and that’s not overly surprising as the 6035, 267-pounder registered 19.5 sacks during his college career with 8.5 of them coming during his 2019 senior season,. With Taylor obviously being an outside linebacker prospect of the Steelers ahead of the 2020 NFL Draft, it’s time to have a quick look at his sacks at Tennessee and contextualize them.

Of Taylor’s 19.5 career sacks at Tennessee I was able to locate all but one of them, his third and final sack of the 2017 season. The other 18.5 have been contextualized below for all to see and included in the data is the snap to sack time of each.

As you’ll see in watching all 18.5 of Taylor’s sacks included in this contextualization, he won quite a bit with his speed and around the edge of ether a tackle or a tight end. However, while most of his career college sacks were him winning that way, he also won in a few various other ways either inside with a quick step or using power.

At the combine, Taylor, who was also at the Senior Bowl in February, had an arm measurement of 33-inches to go along with 9 3/4-inch hands. He uses those longish arms a few times in these 18.5 contextualized sacks. It’s also worth noting that most of Taylor’s 18.5 sacks I broke down came with him rushing off the left side of the Tennessee defense.

According to Pro Football Focus, Taylor registered 34 total hurries in 2019 and that’s not overly surprising. He also has plenty of room for improvement as a pass rusher as he doesn’t effectively counter off his first move frequently enough. Because of that, he will stall at times. He’s far from being a fully developed pass rusher and that’s likely why most view him as a day-two draft prospect. While the results aren’t bad, the process needs work.

Taylor didn’t do anything at the combine after meeting with teams as he was still recovering from surgery to repair a stress fracture in his foot that he dealt with all of the 2019 season. He isn’t likely to do anything at his March 26 pro day but is hoping work out for teams at separate pro day sometime in April.