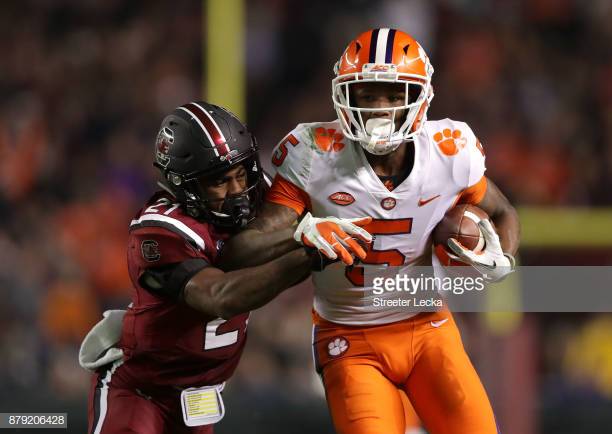 Pittsburgh Steelers general manager Kevin Colbert and head coach Mike Tomlin were both present for the Clemson pro day on Thursday and there were several players there that possibly had their interest. One of those players likely was wide receiver Tee Higgins, an underclassman who registered 135 receptions for 2,448 yards and 27 touchdowns during his college career. With the Higgins pro day now in the books, it’s a perfect time to contextualize several of his pass targets from the 2019 season.

In total, Higgins registered 59 receptions for 1,167 yards and 13 touchdowns during the 2019 season. I have contextualized seven of his games from the 2019 season and he caught 29 passes for 29 562 yards and six touchdowns on 40 total targets against Texas A&M, North Carolina, Florida State, Louisville, South Carolina, Virginia and Ohio State.

While there were 11 incompleted passes thrown Higgins’ way in these seven games, two of those were balls that never made it to him. Three others were dropped by him.

Higgins averaged 4.3 yards gained after the catch on his 29 total receptions in these seven contextualized games. A whopping 22 of his 29 receptions also resulted in gains of 10 yards or more.

Higgins has quite a few impressive catches in these 29 that I contextualized. Additionally, he showed that he’s not just an outside the numbers receiver as five of receptions were inside the hash marks. He showed great body control on a few of these receptions along with a nice catch radius. He can work outside or inside at the slot position as he seems to be very versatile.

It’s hard to imagine Higgins slipping down to the Steelers in the second-round of this year’s draft. If he does, however, he might be tough to pass up even though many seemingly have him projected to be an X-receiver at the NFL level.