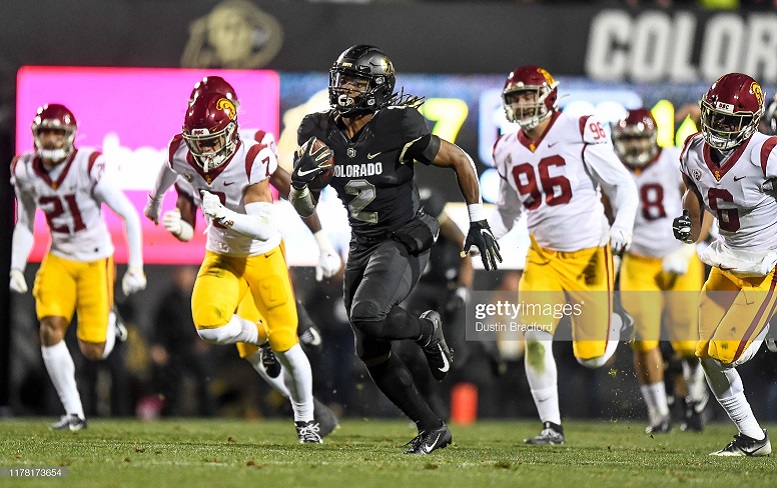 Colorado wide receiver Laviska Shenault Jr. was recently mocked to the Pittsburgh Steelers as their first selection of the 2020 NFL Draft by Chris Trapasso of CBS Sports and with that being fresh on my mind I figured I would do a quick contextualization of his 2019 targets from five of his games.

In the five games of Shenault’s that I contextualized from 2019, which were against Colorado State, Nebraska, Oregon, USC and Utah, he caught 25 total passes for 364 yards and two touchdowns on 38 total targets. It’s worth noting, however, that 71 of those yards and one of his receiving touchdowns in those five games came on one reception against USC via a 4-yard pass.

The average target distance for Shenault in these five contextualized games was just 10.7 yards and his average reception distance was just 6.5 yards.

Including yards gained from behind the original line of scrimmage on his 25 total receptions, Shenault had 201 total yards gained after the catch, an average of 8 yards. Once again, however, it’s important to point out that 67 of those yards came on one reception.

Shenault’s best attributes in these five games was his ability to quickly tuck the football after the catch and get up the field for yardage. While not contextualized below, he also was used as a runner quite a bit in these five games, 12 times in total, with several originating with him as a Wildcat quarterback.

These five contextualized games of Shenault’s from 2019 are probably a good overall representation of his play from the season. I plan on looking at a few of Shenault’s 2018 games as well in the near future to see if he posted similar results as he caught 86 passes for 1,011 yards and 6 touchdowns as a sophomore. He’ll probably project as a X receiver at the NFL level even though he did play some in the slot at Colorado.