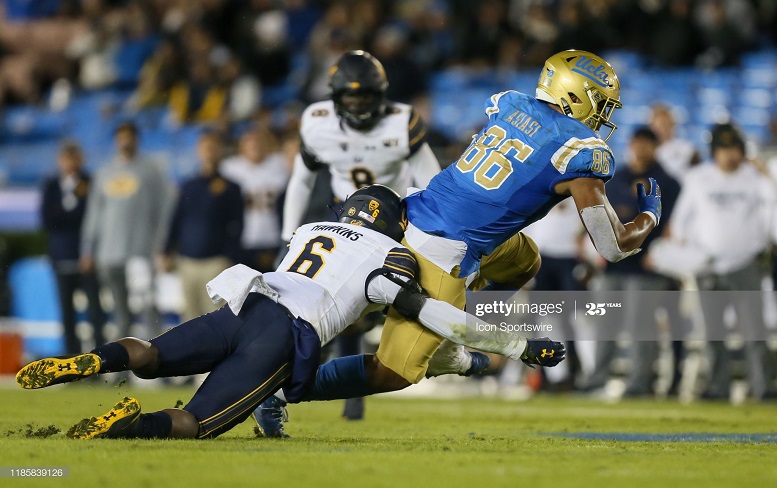 UCLA tight end Devin Asiasi is a player who’s starting to show up in more and more mock drafts for the Pittsburgh Steelers as of late. Because of that and several requests that I have received from readers and listeners of The Terrible Podcast, I now present to all a quick contextualization of quite a few of Asiasi’s targets from the 2019 season.

In total last season, Asiasi, who measure in at the annual NFL scouting combine at 6030, 257-pounds with 33 1/4-inch arms and 9 3/4-inch hands, caught 44 passes for 641 yards and four touchdowns. I contextualized six of his 2019 games against Oklahoma, Washington State, Arizona State, Utah, USC and California and totaled 27 receptions for 453 yards and three touchdowns in those contests.

Asiasi’s average depth of target on the 36 total targets in these six games from 2019 was 11.3 yards and his average completed distance from the line of scrimmage was a healthy 10.0 yards. It’s worth pointing out, however, that just three of Asiasi’s 27 total contextualized receptions was caught more than 16 yards down the field.

11 of Asiasi’s 27 total receptions in these six games came in the middle if the field and thus between the hash marks. He averaged 19.8 yards per reception on those 11 middle-of-the-field catches.

Asiasi ha reliable hands as I only observed one drop on these 36 targets from the six games contextualized.

He caught passes as an attached tight end and as a detached one lined up outside in the slot as well. He is an above average route runner for a tight end. Asiasi’s run blocking needs to be examined much further but in these six games I watched of his he was merely average and could use a lot of development in that part of his game.