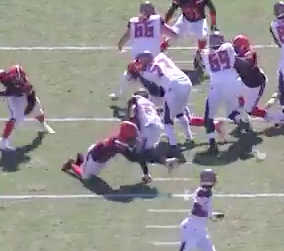 With the Cleveland Browns already expected to allow former Pro Bowl inside linebacker Joe Schobert to part in free agency, the team has now also released veteran Christian Kirksey, leaving their inside linebacker position in the hands of young players, led by Mack Wilson, whom they are high on heading into year two.

Kirksey was originally a third-round draft pick of the Browns back in 2014, and had been a full-time starter since 2016, but he has missed all but nine games due to injury over the course of the past two seasons. Reportedly, the team tried to renegotiate Kirksey’s contract in light of his injuries, but they could not agree to terms, which resulted in the two sides parting ways.

Kirksey has two career interceptions to his name, along with 16 passes defensed, with four forced fumbles, three recovered, and 11.5 sacks, with 22 quarterback hits. But he only played in seven games during the 2018 season, and was limited to just two last year due to a chest injury.

In spite of this, he reportedly already has visits lined up with three teams, including the Las Vegas Raiders and the Buffalo Bills. The Raiders just released Tahir Whitehead, so there is a fit there. If he should sign with the Bills, he would stay east and would pair with Tremaine Edmunds, the younger brother of the Pittsburgh Steelers’ Terrell Edmunds.

The Browns signed Kirksey to a four-year, $38 million extension in 2017, averaging $9.5 million per season. He would only see the first two years of that deal, earning a total of just under $22 million from that $38 million number.

Kirksey will only be turning 28 years old in August, so as long as a team feels good about where he is from a health standpoint, there is no reason to believe he should not receive a fairly substantial deal, though it won’t approach the top of the market.