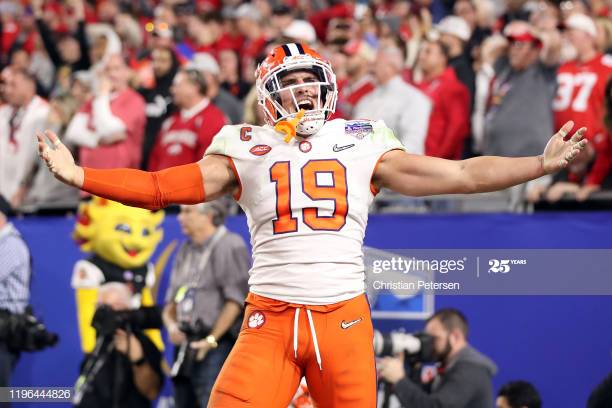 – Great size, broad shoulders and large upper half, unique body type for the position
– Downhill, physical player who delivers a heavy blow on contact as a tackler
– Strong, reliable open field tackler with excellent grip strength and technique, wraps and drives through his tackles and knocks ball carriers backwards
– Versatile and lined up all over the field, variety of hats
– High energy player and tone setter on the team
– Takes good angles to the ball, tracks it well in the air with soft hands and ability to finish plays
– Elite testing numbers and excellent starting experience
– Seemingly a leader in that locker room on a talented defense

– Awkward player who gets exposed in space, rigid and stiff when asked to change directions, much more effective in a line than he is when asked to change directions
– Struggles to flip hips in man coverage and doesn’t play to testing profile, not fast enough to catch up once beat
– May be scheme-limited and lose versatility at NFL, will thrive near the line of scrimmage but will struggle the further away he is
– Tweener without a defined fit at next level
– Only moderate production throughout career, especially considering starting experience

Muse popped up on our radar because he showed up on the Steelers’ radar. Clemson was the one Pro Day Mike Tomlin and Kevin Colbert attended before the world went all Walking Dead and the one dinner we know they had was with Tanner Muse.

What he did at the Combine was interesting, too. A 227 pound safety running a 4.41? That’ll turn heads.

His tape shows a different story though prior to that 40 time, he was viewed as a linebacker. And you can see why. Muse works best closer to the line of scrimmage, an impactful hitter, reliable tackler, who gives off Danny Bateman vibes. Maybe doesn’t have that many screws loose but a high energy player who thrives when he gets to be physical.

Though he has issues in coverage we’ll get to in a second, Muse shows off those center field skills from his high school days – the Steelers drafted another DB with a baseball background in Senquez Golson – exhibiting soft hands, good tracking of the ball, and the ability to finish. Take a look at these two INTs.

But it’s hard to see him sticking at safety at the next level. Muse shows a robotic level of stiffness when asked to change direction. Can’t show you a better example this this miss against Florida State.

He’s best coming downhill in a line but gets exposed when asked to move laterally. You’ll see the same issue when flipping his hips in coverage, getting beat here.

Muse is an impressive athlete who thumps the run and at worst, should become a valuable special teamer. Maybe one of the league’s better ones. But he should convert to linebacker to maximize his strengths and limit his weaknesses, and he won’t be as scheme adept in the NFL as he was at Clemson. Interesting player but he won’t solve the Steelers’ safety needs.

Hard to offer a comp but I’d look towards former Bucs’ linebacker Quincy Black, a 40 game starter over a six year career.