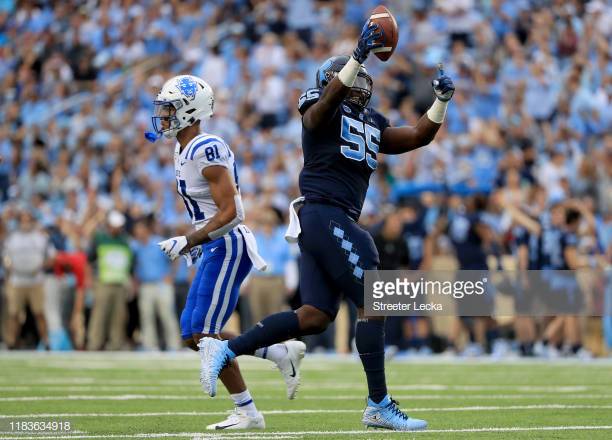 Day Three thoughts that for the first time in 2020, saw the defensive players workout. The front seven guys, defensive line and linebackers. Let’s check it out.

– Overall, I wouldn’t say this is a super strong EDGE or interior defensive line class in terms of overall talent and draft stock. But man, it is a fast and athletic group, a sign of the college game and the need for athletes at every level on Sundays.

Consider this, of the 18 defensive tackles who ran the 40, they averaged a 5.01. Eight of them ran sub-5 and only two ran worse than 5.20. They were led by Oklahoma’s Neville Gallimore, who blazed a 4.79 (1.69 ten split). He did, however struggle with some of the agility drills, running a 7.95 three cone and 5.01 short shuttle, and had some issues with balance in drills. Can play a little too out of control and get over his toes.

– North Carolina’s Jason Strowbridge has impressed me since the Senior Bowl. Not a terribly big guy but has a powerful bull rush, did well in his 1v1 reps in Mobile, and had a nice day Saturday. 4.89 40 (1.72 ten split), 31 inch vert, 9’5″ broad, and a solid 7.45 three cone. Looked athletic in drills and coaches even had him in the LB drills, where he caught the ball unusually well for a big guy. He’s definitely a DE who can kick inside on third down, not a LB, but a good day for him.

– Rob Windsor seems like someone the NFL will like more than I do. I just don’t see it. Testing was meh (4.90 40, 28.5 inch vert at 290 pounds) and he looked too tall and stiff in drills. Might give you a little something against the run but to me, a low-ceiling type player who simply might not be athletic enough to stick in the NFL.

– The two true nose tackles Pittsburgh should be circling in on? Ohio State’s Davon Hamilton, who we’ve talked about plenty, and LSU’s Rashard Lawrence. Neither with especially good days, though not terrible either, but their game isn’t looking pretty with their 10 split or the new hoop drill.

– Gotta be honest. Not a great group. Especially with Chase Young sitting out of all the testing and on-field workouts. The DTs practically ran as fast as the edge guys. The winner of the day has to be a small schooler, North Dakota State’s Derrek Tuszka. 4.79 40, 1.69 ten split, and by far the best three cone, a 6.87. Strong day in drills as well. Definitely helped his cause standing out on the big stage.

– On the other side of things, rough day for AJ Epenesa out of Iowa. Did better in the on-field testing but if you’re into metrics. 5.04/1.78, 32.5 inch vert, and 7.34 three cone. None of that screams “NFL success.” It’ll be a battle between Team Tape and Team Analytics.

– Another guy with questionable athleticism is Michigan State’s Kenny Willekes. Showed some burst with a 1.69 ten split but he just doesn’t look fluid trying to corner and thought his punch on the pads felt a little weak. 7.39 reflects that fluidity concern though honestly, basically none of the edge guys did well in the agility circuit.

– Couple of Syracuse guys with positive days. Alton Robinson had much better testing than teammate Kendall Coleman but both showed the ability to flatten and corner and looked fluid moving backwards in drills. Coleman has a powerful strike. His 4.99 will be the issue for teams to try and overlook but his ten split brings better news (1.70).

– Boise State’s Curtis Weaver had an…unusual day, I think? NFL.com has him listed running a 4.84 40 but the broadcast never showed him running and had his named removed from the list. I didn’t see him in on-field drills other. Yet they mark him down for an impressive 7.00 three cone time despite being a big guy at 265 pounds. Steelers had a formal meeting with Weaver and they like drafting their edge rushers big (see TJ Watt, Bud Dupree, and Anthony Chickillo). So he’s a name to watch.

– Overall, Kevin Colbert called it an “unusually strong” EDGE class and I just don’t see it.

– Glad the Steelers got Devin Bush last year but had he been part of 2020’s group, the Steelers might not have felt as compelled to trade up. There isn’t the athletic scarcity that existed with the class a year ago. Ten linebackers ran sub 4.6 while three ran under 4.5. Yes, some of those are clearly hybrids/tweeners like Isaiah Simmons out of Clemson, who had one of the best workouts ever (4.39 40, 39 inch vert, 11’0″ broad at 238 pounds) and Michigan’s Khaleke Hudson.

But you have guys like LSU’s Patrick Queen, Oklahoma’s Kenneth Murray, Mississippi State’s William Gay Jr. (no relation, if you’re wondering) and Colorado’s Davion Taylor. It’s unfortunate Queen and Murray pulled hamstrings running their second 40 and couldn’t participate in on-field drills. Gay Jr. is as rocked up as they come while Taylor and Logan Wilson, who ran an impressive 4.63 and showed at the Senior Bowl that translates, are all worthy Top 100 picks. It’s an impressive off-ball class.

Solid day three picks who are low-ceiling, high-floor that will make your roster better while carving out a niche on special teams.