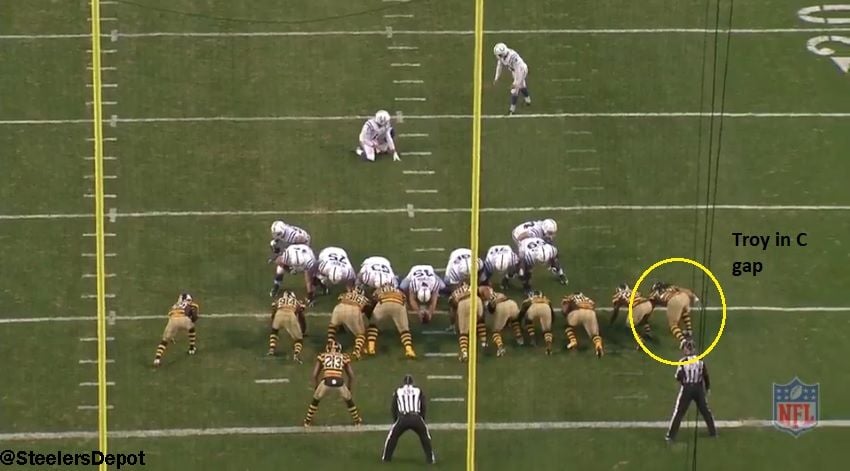 Of all the stories Pat McAfee’s told over the years, perhaps the most famous – and hilarious – one involves Troy Polamalu. In 2017, McAfee told the story of how Polamalu screwed him out of his first touchdown.

It’s 2014. The Indianapolis Colts were at Heinz Field with the McAfee family, they’re native Pittsburghers, in the stands. Indy’s gameplan called to run a fake field goal with the ball inside the seven yard line. McAfee would keep the ball and run to the left side where, according to their tape study, there would be a vacant gap.

With the opportunity to run it right before the first half, the Colts called the fake. But Polamalu flipped his assignment and aligned in the supposedly vacant gap, forcing McAfee to abort the call. Indianapolis had to settle for a field goal.

If you’ve somehow never heard it before, here’s a link to McAfee telling the full story. Fair warning, some NSFW language for those listening at work.

So that’s your background. We got a long-awaited update to this story this weekend. With Polamalu making media rounds during NFL honors and Hall of Fame announcements, for the first time he was asked about this play.

Shoutout to Youtuber RBT, who runs a popular Madden/video game channel, for asking the question.

Polamalu said he’d heard McAfee’s story and gave his version of what compelled him to line up in a spot he never had before.

“So I’ll definitely give you the backstory. It was really funny the way things work out serendipitously. Our special teams coach had approached me and said ‘man, we always run a block to the field. That’s what we’ve been doing all year long. We need to find a time to throw it into the boundary.’ And we had talked about this before the Indianapolis Colts game. So I went to him on the sidelines, we discussed like hey man, they’re probably going to make this field goal. So let’s just throw this in right now. And it happened to be at the exact same time [the Colts were running a fake].”

Of course, who was the special teams coach who made the adjustment and ultimately, even if accidentally, stopped McAfee and Colts from finding the end zone? None other than Danny Smith (#DannySmithForever).

Though Polamalu had some of the best football instincts in football history, it was plain ‘ol excellent self-scouting by the Steelers to make a very timely adjustment.

McAfee played the clip on his show Friday morning.

Chatting with @Ike_SwagginU and this is the very first time I've seen or heard Hall of Famer @tpolamalu's explanation for ruining my hopes and dreams #Steelers #PatMcAfeeShowLIVE pic.twitter.com/5HlrfWUEK8

Check out the whole RBT interview with Troy in the link below. I have it cued up to the question about the play though the entire conversation is worth watching.