In 1933, linemen Ray Kemp became the first African American to ever wear a Pittsburgh Steelers (then, called the Pittsburgh Pirates) uniform, appearing in three games as a substitute tackle. At the time, he was one of just two black players in professional football. There was also Joe Lillard, halfback for the Chicago Cardinals, playing from 1932 to 1933.

The league never officially segregated but it was an owner-wide understanding not to sign black players. No other African-American would play in the NFL until 1946, when running back Kenny Washington re-broke the color barrier for the Los Angeles Rams. Teams didn’t reintegrate all at once either. The final team to do it, Washington, waited until 1962 when they signed Bobby Mitchell and Ron Hatcher.

So what about Pittsburgh? When did they reintegrate? History says very little.

Check the Pro Football Hall of Fame’s official list and they note FB Jack Spinks played for the Steelers in 1952. But he wasn’t the only one.

In fact, there were seven African-American players signed by Pittsburgh prior to the 1952 season. Spinks was one of only two to appear in a regular season game but all were trailblazers for their time, the first steps of eroding away football’s history of racism and bigotry.

The seven Steelers are:

All of whom deserve special recognition for their place in football history. That’s what we’ll do today.

Benson should be credited as the first black player signed by the Pittsburgh Steelers. The now defunct Pittsburgh Press, the clipping shown below, noted he was signed March 2nd, 1952. He starred for four years at HBCU Morris Brown. Credit Kemp, the first black Steeler, for pushing Benson through the door. He recommended Benson to new Steelers’ head coach Joe Bach.

There was a real opportunity for him to make the team. 1952 began with Ernie Stautner’s “don’t call it a holdout,” a term the team never officially used. Stautner owned a drive-in and a bus line back home in New York, needing to find someone to run those businesses before he could resume his football career. He didn’t report to camp until August 5th, missing roughly a week’s worth of practices. He wasn’t the only one. Star LB Jerry Shipkey spent time away from the team for an unspecified personal issue, returning August 4th, while end Hank Manarik missed the entire season with a detached retina suffered the year before. It would ultimately end his football career.

But Benson’s time in Pittsburgh was short-lived. Bach, installing the T formation (Pittsburgh was the NFL’s last to switch from the single wing), conducted physically demanding practices. After a “light” session on July 28th, the team held its first real practice the 29th.

Benson, along with several others, were cut on the 30th, Bach declaring those players not physically fit enough to deserve a spot on the roster.

Switching sports, he briefly played basketball in the Eastern Basketball Association. Four games with the Hazelton Hawks, averaging 12 points and 8.5 rebounds per game.

Some press clippings from the time only mention four black players as being part of the ’52 camp roster: Benson, Thomas, Robinson, and Spinks. But earlier editions paint a different story. Like halfback “Suitcase” Willie Smith.

He grew up where pro football basically began. Born in Massilon, Ohio in 1930, the Massilon Tigers were one of pro football’s early powerhouses going undefeated in 1904, 1905, and 1907.

He attended West Virginia State – the same school as Bill Nunn, by the way – on athletic scholarship, playing basketball and football. His basketball team won the conference championship all four years he attended and he was co-captain of the football team his senior year.

That’s also where he earned the nickname “Suitcase,” showing up to the school with nothing but a lone suitcase.

Smith’s time in Pittsburgh was similar to Benson’s, one of 12 cut on July 30th for, in Bach’s mind, not being physically ready to compete.

“The new Steeler coach apparently has set minimum physical standards for his players. Those who did not measure up were released without further consideration.”

Although the timeline is unclear, he served as a second lieutenant in the Army during the Korean War before returning stateside and opening several businesses, including Beeson’s Video Parlor and Buddy’s Flame Restaurant and Lounge in the West Virginia and Washington, D.C. areas.

Newman, like Smith, was a name I came across along the way. Information on him is awfully scarce. He made it through the first week of Steelers’ practices but was released by Bach on August 7th, the final cutdown prior to the Steelers’ first preseason game. 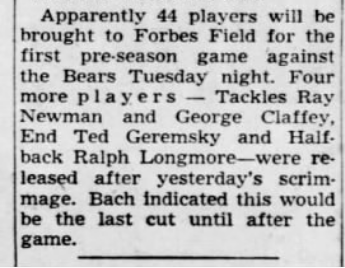 The only two references I could find was the news he had been cut and a July 28th clipping indicating he was part of the training camp roster. You also see his photo above. Wilberforce, where Newman attended, was the the USA’s first private HBCU.

Spinks is the most well-known name of the list and the player the Hall officially recognizes as reintegrating the franchise. There’s some debate about which black Steeler was part of the team first. As noted above, the Press says Benson was the first on the team in early March, 1952. But Spinks and Bill Robinson were the first African-American players drafted in franchise history. The draft that year was held in January, two months before Benson’s deal. It seems Spinks signed his contract after Benson in the middle of March but who was “first” is more of a moot point here. 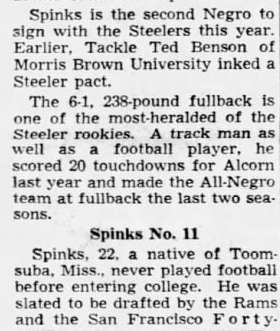 1952 was a historic draft. Across the league, ten black players were selected, starting with Ollie Matson taken third overall by the Cardinals. Matson would be one of football’s greatest runners, ending his career only behind Jim Brown in all-purpose yards, and inducted into Canton in 1972.

According to reports at the time, the Los Angeles Rams and San Francisco 49ers had interest in Spinks but thought they could sign him after the draft. Teams were surprised when Pittsburgh nabbed him in the 11th round.

Spinks played one season with Pittsburgh, that ’52 season, carrying the ball 22 times for 94 yards while chipping in two receptions. Here’s a clip of him, #37, taking this handoff before lateraling it to HB Fran Rogel.

Here is an awesome, high-resolution photo of Spinks and Robinson courtesy of the Carnegie Museum of Art. Robinson on the left, Spinks on the right. 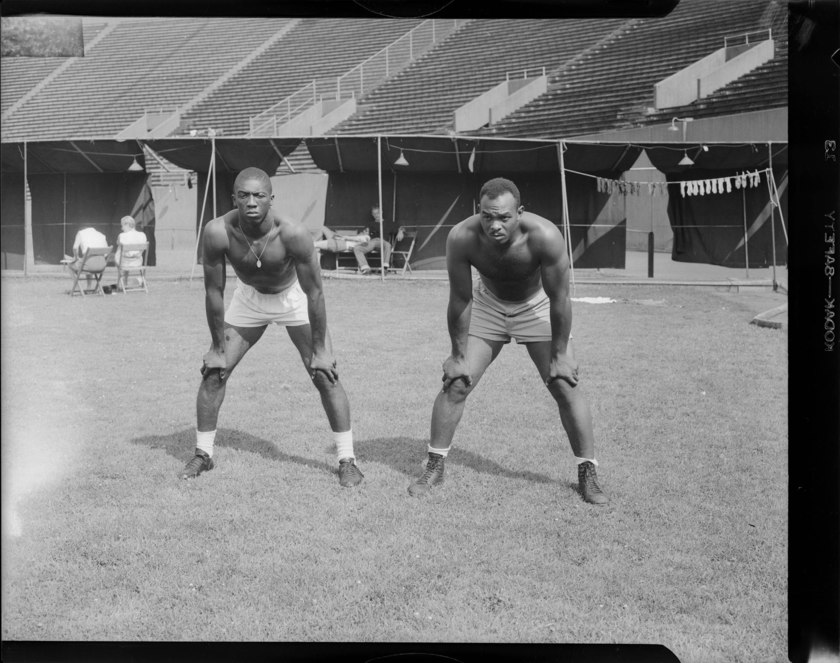 Robinson was the second black Steeler drafted, taken in the 25th round. A local product from Pittsburgh, Nunn, writing for the Pittsburgh Courier, predicted the team had interest. No doubt the organization valued his columns and information, eventually leading to Nunn being convinced to join the front office. The Chief also reportedly knew Robinson growing up due to their local ties. Kemp, as we’ve noted, was the AD at Lincoln, where Robinson attended, and that may have had an influence in him getting drafted.

Pittsburgh released him September 23rd, five days before their first regular season game against Philadelphia (they would lose 31-25) as they whittled the roster down to 37, four away from the league’s max. But he lasted through the preseason, meaning he logged actual snaps with the franchise. 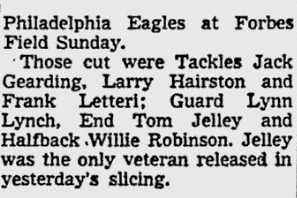 He latched onto Green Bay later that year for at least a pair of games. After spending time in the CFL with Winnipeg, Robinson would later say he preferred playing up north due its collegiate feel, he circled back to the NFL eight years after entering it, spending one season with the New York Titans in their inaugural year in 1960.

Here’s a photo of Robinson and Spinks from Steelers’ training camp. The two showed up early to camp to hit the ground running, despite Bach only mandating QBs and centers to report about a week beforehand to prepare for running the T formation. 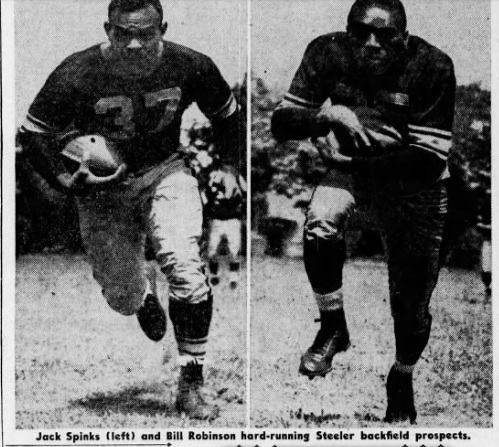 Thomas is the player whose Steelers’ tenure we know the least about. It’s difficult to find any sort of reference to him in any newspaper in any capacity; college, pros, anything about his life. We only have his photo in that group of six and a reference to him being on the roster. It’s unclear when the team released him.

At 6’2 245, he was one of the bigger players on the roster during his brief stay on the team.

Curiously, Atkins wasn’t even included in that group of six black players shown above. But there is a reference to him when he was cut by the team August 6th. It’s unknown when he was signed and possible he was brought onto the roster sometime right after training camp. That would make sense as to why he wasn’t in the photo, which was captured in late July. 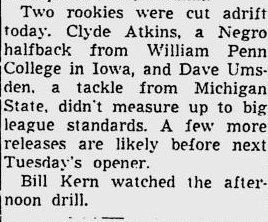 Before joining Pittsburgh, he spent part of the 1951 preseason with the Chicago Cardinals but broke two ribs against the Green Bay Packers, squashing his chances of making the roster.

He was also an accomplished boxer and all-around athlete. Post football, he married jazz singer Sarah Vaughn, though it lasted only three years, 1958-1961.