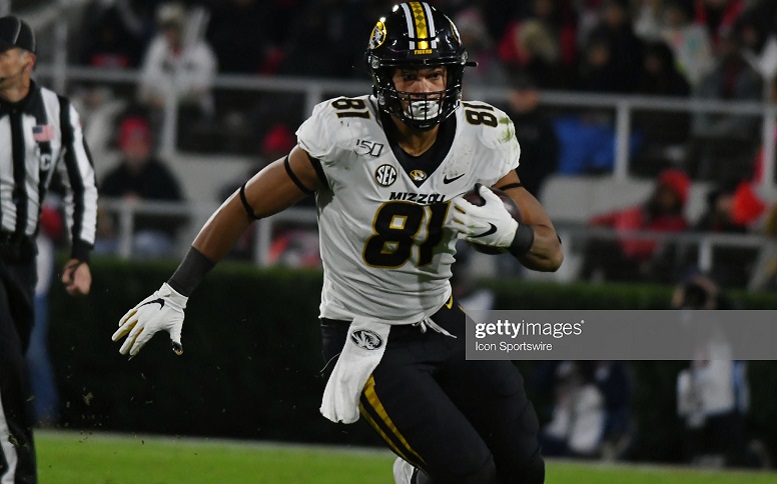 The Pittsburgh Steelers have met with at least two players already at the 2020 NFL Combine. According to media reports, they’re talked to TCU WR Jalen Reagor and Missouri TE Albert Okwuegbunam for an 18 minute interview.

#TCU WR Jalen Reagor says he had a formal meeting with the #Steelers last night.

Reagor is thickly-built at just under 5’11, 206 pounds. An underclassmen out of TCU, he caught 43 passes for 611 yards (14.2 yards per catch) and five touchdowns for the Horned Frogs in 2019. His best year came the year prior, eclipsing the 1000 yard mark with nine scores. He also saw work as a punt returner this past season, averaging an eye-popping 20.8 yards on 15 returns, highlighted by this 70 yard score against West Virginia.

With a deep class at receiver and depth an issue in Pittsburgh, it’s almost certain they select a WR at some point in the draft. Since taking over in 2000, Kevin Colbert has chosen a WR in all but two draft classes.

Okwuegbunam, another underclassmen, is coming off an impressive Tigers’ career. Like Reagor, his numbers in 2019 dipped a bit, catching just 26 passes for 306 yards, but some of that can be attributed to a change in QB after Drew Lock left. In 2018, he hauled in 43 balls for 466 yards and six scores. Questions exist for him as a blocker but he has the size the team looks for, weighing in at 6’5/4, 258 pounds with 34 1/8 inch arms. That basically fits what the team looks for at TE, as I noted yesterday.

Only two TEs at the Combine fit that bill. Notre Dame's Cole Kmet and Missouri's Albert Okwuegbunam. Names to keep an eye on.

While these are just brief, get-to-know-you conversations, the NFL has reduced the number of interviews from 60 to 45. Meaning, teams get to talk to only about 13% of all those players in attendance. So the fact they’re selecting these players to meet with signals some sort of legitimate interest, especially in underclassmen who haven’t been on team’s radars quite as long as the seniors.

We’ll have a post in the morning that will keep a running tab on who they meet with over the next couple of days.