According to several reports on Wednesday, the 2020 NFL season could include a new playoff format if the current CBA proposal that owners are pushing for gets ratified in the coming weeks. In that CBA proposal from NFL owners, the playoff field would be expanded to seven teams from each conference starting in 2020. While it’s seemingly hard to find many fans of the NFL that are ecstatic about the potential playoff format change, adding one more team per conference sure would have befitted the Pittsburgh Steelers more than any other NFL over the course of the last eight seasons.

Dating back to the 2012 season, the Steelers have missed making the playoffs four times in total. However, all four of those times they finished as the seventh seed in the AFC and thus would have qualified for the postseason tournament had the currently proposed format already been in place. It’s worth pointing out, however, that three of those four times the Steelers would have made the playoffs with an 8-8 record.

Not that the Steelers deserved to make the playoffs this past season with an 8-8 record and losers of their last three games, but had that happened as a seventh seed and under the proposed format changes, the team would have had to have played the Kansas City Chiefs on the road in one of the three Wild Card games. Solid Steelers defense and all, it’s hard to imagine the team scoring enough points to beat the eventual Super Bowl champions. Think about how awful a Devlin Hodges versus Patrick Mahomes matchup at Arrowhead Stadium would have been for the visiting Steelers.

In 2018, the Steelers team that failed to make the playoffs with a 9-6-1 record would have had to have played the New England Patriots on the road in one of three Wild Card games had the currently proposed format been in effect. Once again, it’s hard to imagine that team beating the Patriots, the eventual Super Bowl champions that season, on the road.

Assuming this new playoff format ultimately gets ratified and put into existence, what are the chances that it results in very mediocre teams such as the 2019 Steelers making the postseason tournament?

According to a Wednesday report by ESPN, the expanded playoff format proposal in a new CBA would possibly begin as soon as the 2020 season with a proposed 17-game regular season not being too far behind in either 2021 or 2022. That same report indicates that as part of the deal now on the table, players would go from a 47% revenue share under the current deal to 48% share at 16 games, and then to a 48.5% share if they go to 17 games, shifting $5 billion of revenue to the players’ side.

Obviously, the NFL owners would benefit greatly in television revenue should an expanded playoff field and a 17-game regular season schedule ultimately come to fruition, which seems destined to happen at this point. Most might not like these seemingly forthcoming changes in the NFL, but we better get ready for them just the same. 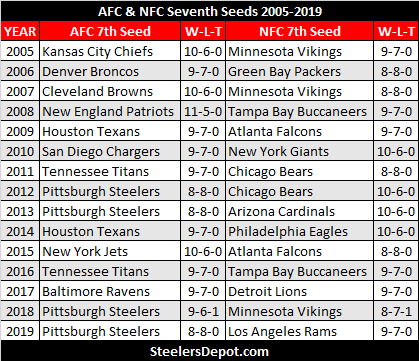