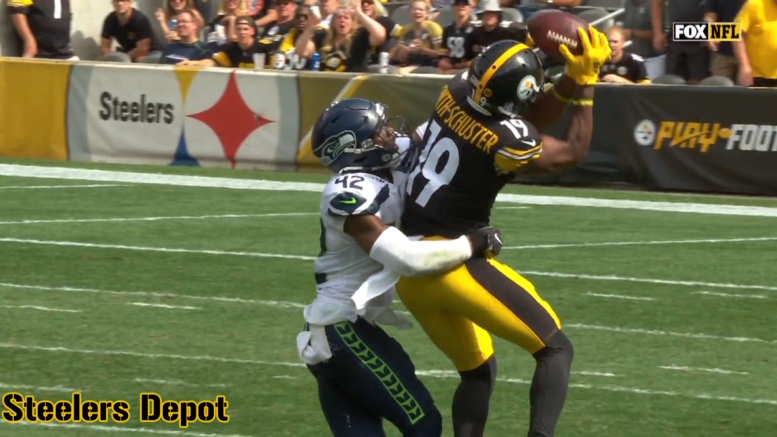 The Pittsburgh Steelers find themselves in a curious situation this offseason, in no small part due to the manner in which the 2019 season unfolded. Due to a variety of factors, for example, the team lacks a clear idea of who JuJu Smith-Schuster is and can be as a number one target in their offense.

Not only did we see the team lose Antonio Brown as an on-field attention hog, not only did we see the loss of Ben Roethlisberger for almost the entire season, we also watched Smith-Schuster battle injury, almost all year. He missed four games due to a knee injury, but he played through multiple injuries prior to that as well, a fact often forgotten.

So after a 111-reception, 1426-yard Pro Bowl season in 2018, during which Brown joined him in the Pro Bowl and Roethlisberger was slinging the ball like never before, what followed was in many ways a lost season for the 2017 second-round pick, failing to crack 50 receptions, barely 500 yards, and just three touchdowns.

The problem? This is the offseason during which a player like him would normally be extended by the front office. But not only is it difficult because they can’t be certain what he projects production-wise going forward, they also don’t really have the cap space.

It’s almost certain that the Steelers will allow Smith-Schuster to play out his contract, for one because they don’t have much of a choice, because the bulk of whatever salary cap space they are able to produce will be devoted to retaining Bud Dupree, and if there is no CBA agreement, creating space will be even more restricted.

Pro Football Focus recently looked at Smith-Schuster’s curious case. While they have previously argued, or came to the conclusion, that he is deserving of an extension prior to hitting the open market, in an article dedicated specifically to the topic, they acknowledge that the practical reality is much cloudier.

“Injuries, quarterback play and increased defensive attention all played roles in the downtick in production, but at some point, great players are able to overcome negative external factors”, the article concludes. “JuJu will surely be looking to get paid like a great player, so it is on him to put the 2019 season behind him and take a step back in the right direction next season”.

One of the interesting things that they note is that, despite being the ‘number one receiver’, Smith-Schuster actually spent more time by percentage playing out of the slot than he did in either of his first two seasons. It also notes that the accuracy of his pass targets dropped from about 60 percent to 50 percent, demonstrating poor quarterback play.

Then again, it’s also pointed out that he dropped five passes while playing out of the slot, which is two more than in his first two seasons combined. Even with all other factors accounted for, including injury, it can be argued that Smith-Schuster regressed last year. The question, to which there is no answer, is what he will do in 2020, and especially beyond.