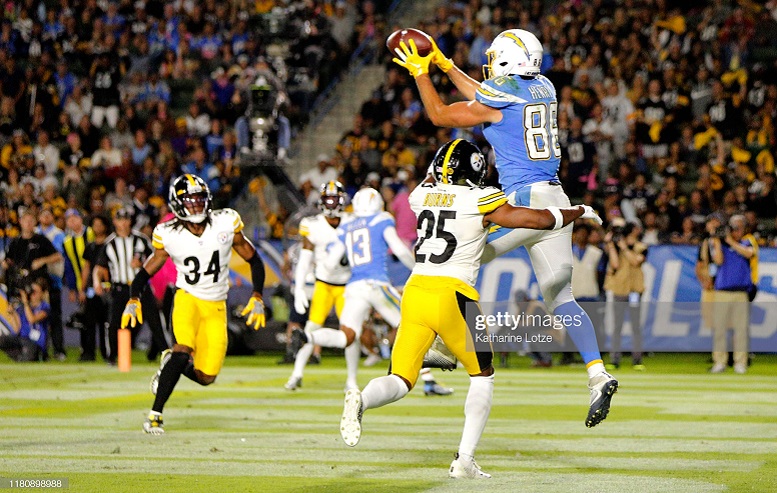 NFL free agency officially begins on Wednesday, March 18 and already there’s heavy speculation and suggestions floating around about every NFL team and which free agents each should or likely will have interest in. On Thursday, Marc Sessler of NFL.com joined the free agency frenzy fray by suggesting one free agent fit for each AFC team. Sessler suggested Los Angeles Chargers tight end Hunter Henry for the Pittsburgh Steelers and below is his reasoning for doing so.

With Ben Roethlisberger teed up for a healthy return, the Steelers must focus on surrounding their big-bodied flinger with new weapons. Henry has yet to experience a true breakout campaign, but the 6-foot-5, 250-pound target has produced moments suggesting a lofty ceiling. One year removed from a season-ending ACL tear, Henry spent 2019 competing for touches in a Bolts offense boasting two 1,000-yard pass catchers in Keenan Allen and Mike Williams and nearly a third in Austin Ekeler. We haven’t seen Henry in a genuine feature role. He would fit with plenty of clubs, but the Steelers could use an X-factor at the position to brighten the final chapters of Big Ben’s NFL journey.

On paper and in theory, Henry would indeed be a great fit for the Steelers. Even so, the Arkansas product and former second-round draft pick figures to be this year’s free agent prize at the tight end position, assuming the Chargers don’t place the franchise tag on him by the early March deadline. The Chargers have plenty of salary cap space and not many options at tight end so it’s hard to see them letting Henry walk off uncontested via free agency.

Even if Henry is allowed to test free agency, he’s likely to command a contract that averages more than $9 million a season and that would be too rich for the salary cap-strapped Steelers in the middle of March. Henry would likely have plenty of other suitors bidding for his services as well and at least one of those several teams would likely be willing to guarantee more of his next contract than the Steelers would want to.

If the Steelers are to add another tight end to their offseason roster in the coming months, such a player would likely come via the 2020 NFL Draft. Currently, the Steelers have tight ends Vance McDonald, Zach Gentry, Christian Scotland-Williamson and Kevin Rader all under contract for the 2020 season. The team also seems interested in possibly re-signing tight end Nick Vannett back for cheap in the coming month as well.

In future free agent projections for the Steelers, Sessler needs to lower his target quite a bit. He needs to think cheap and well under the radar. Any suggestion that even remotely resembles a higher profile player is just a waste of internet ink and keyboard typing on his part.

Our very own Alex Kozora will post a list of more realistic 2020 free agent targets for Steelers in the very near future so be on the lookout for that article.