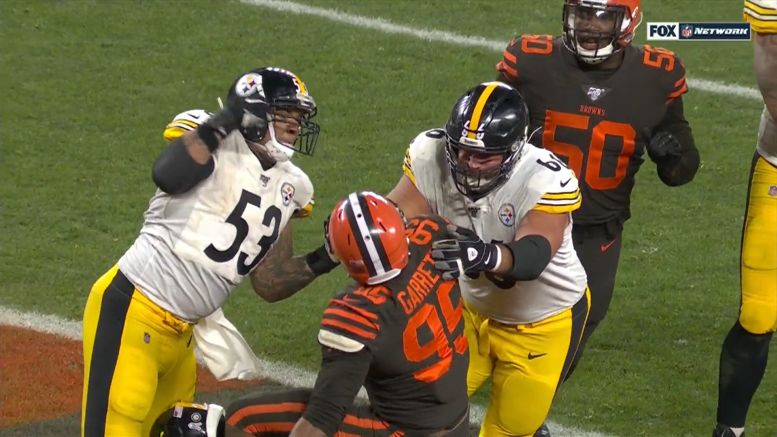 Roughly three months after he smashed Mason Rudolph over the head with his own helmet, Cleveland Browns defensive end Myles Garrett yesterday cordially sat down with NFL commissioner Roger Goodell to discuss the terms of his reinstatement after he was suspended indefinitely as a result of the incident.

Garrett, a third-year defender, and Rudolph, the Pittsburgh Steelers’ second-year quarterback, quarreled at the tail end of a mid-November game between the two teams. The defensive end brough Rudolph down to the ground after he had thrown a screen pass and followed through the motion.

Under the letter of the law, a flag could have been called for roughing the passer on the play. None was called, and Rudolph was frustrated, having already thrown four interceptions in a multiple-score loss. He attempted to dislodge Garrett’s helmet, which prompted the defender to pull him up off the ground by his facemask and rip his helmet off.

Rudolph then proceeded to gather himself and rush to Garrett to confront him, who had by then been separated by multiple Steelers linemen. It was at that point that he struck Rudolph in the head with the quarterback’s own helmet, which he had still been holding.

The incident occurred under the bright lights of primetime, the only game in town, so to speak, and drew national headlines, with initial reactions even suggesting that Garrett ought to have been arrested on-sight for assault.

While it never reached that far, it took a day for Garrett to actually apologize for such a dangerous display that could have seriously injured Rudolph. Fortunately, the quarterback physically appeared to be no worse for the wear.

Though the defender met with Goodell yesterday, initial reports say that there is no immediate timetable to update his status. Garrett is naturally hoping that he will be reinstated in time to participate with the Browns for their season opener in September.

To clarify, Goodell was merely present at the meeting, and was not the arbiter. Previous reports have suggested that the league is quietly ‘hoping’ that they will be given reason to reinstate the defender, who sat out the final six games of the 2019 season.

The first-overall pick in the 2017 NFL Draft, Garrett already earned All-Pro recognition in his second season and was on-track to make it first-team in 2019 by the time he smashed his way out of the conversation. He did finish the season with 10 sacks in 10 games, along with a pair of forced fumbles and 29 tackles.