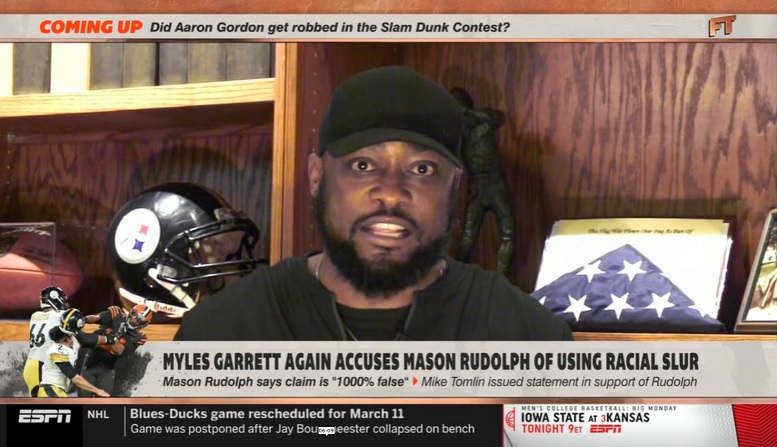 Like it or not, the Mason Rudolph racial epithet allegation is pretty much the biggest story in the NFL news cycle right now, or at least the most durable. Which means that we are seeing a number of different people taking the opportunity to step in and comment on it.

The majority of us surely thought this was all dead back in November, if not December, but here we are in the middle of February and it’s arguably bigger than ever before, with Myles Garrett going public with his allegation in a televised interview, and now potentially having exposed himself to a defamation lawsuit.

Increasingly, I find, it seems as though the tide is turning in Rudolph’s favor, with many questioning the veracity of Garrett’s claim. Many questions have arisen about the nature of his claim and who was aware of it and when. Pittsburgh Steelers head coach Mike Tomlin so vocally going to bat for him also played a major role in this shift.

Take Michael Wilbon’s remarks on Pardon the Interruption, for example, who was moved a good bit by Tomlin, arguably the most prominent African American in professional sports coaching at the moment, and the remarks that he made in defending Rudolph’s character.

“Just from watching Mike Tomlin from afar, mostly, I think he’s the most unassailable, unimpeachable witness you could have in this situation, to speak out. When Mike Tomlin speaks out like this, to me, he has complete and utter credibility, and I believe him”, Wilbon said

Truth be told, as someone who is not subject to damaging and disparaging remarks about my ethnic background, I can’t make claims on this matter, but I’ve always been dubious about this argument, that if it’s not made obvious that it happened right away, it probably didn’t happen. Nevertheless, it is a part of the conversation, and for many, a very important one.

As he told ESPN, Garrett has claimed that Rudolph called him a “stupid N-word” while he was tackling the quarterback to the ground after tossing a screen pass in the waning seconds of a Steelers loss during a mid-November game last season.

Rudolph then attempted to dislodge Garrett’s helmet, failing, with the defender responding by pulling him up by his facemask and forcibly ripping off his helmet. After Rudolph got up and pursued him, he struck the quarterback on the head.

Garrett was only days earlier reinstated from an indefinite suspension stemming from that incident. It was during the appeal of that suspension that, it was leaked, he first made this allegation on the record, though he has claimed, and others have corroborated, that he informed some individuals on the night of the incident.