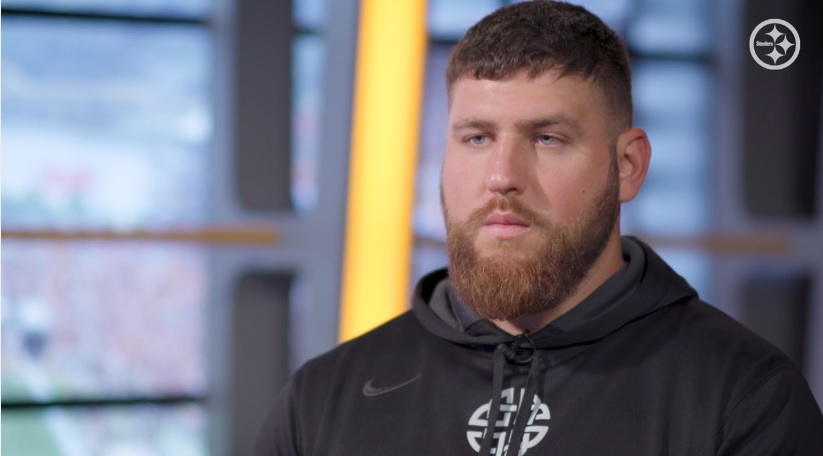 Matt Feiler went through his first season as a full-time starter since his final year at Bloomsburg. Though he ended it much worse than he started, it’s fair to say he had an overall successful season and someone the team is counting on as a starter going forward.

And going forward, Feiler says he wants to be a more mobile player. Sitting down with Steelers.com’s Missi Matthews, he outlined his offseason goals.

“My mobility,” he said. “I feel like sometimes my hips get a little tight. I want to keep working on getting those looser and that’ll help me with my pass protection and stuff like that.”

And how will Feiler accomplish that? That’s above his pay grade.

“I don’t know. That’s what Gie is for. Gie says he has a plan to help me out for that. So I’ll be working with him in the offseason.”

“Gie” is longtime strength and conditioning coach Garrett Giemont. Like any NFL team, those coaches work closely with players to develop the right plan to accomplish whatever physical goal needs to be attained.

One thing Feiler’s done since becoming a Steeler is drop weight in order to be a quicker and more mobile athlete.

“I’ve done some changes. I lost some weight, lost some body fight. In turn, that helped with my speed and my movement really. That was the biggest part for me coming from Houston to here. Just losing the weight and being able to get out of my stance faster and be able to move around faster.”

Feiler was initially signed as an undrafted free agent by the Houston Texans in 2014. Pittsburgh claimed him the following summer where he’s climbed the ladder from practice squad, to making the 53, earning playing time, and ultimately becoming a Day One starter.

He’ll almost certainly retain that starting role in 2020. It’s a better question of where that will be. That answer may be tied to Ramon Foster’s future. If Foster is released in a cost-cutting move, Feiler is likely to shift to left guard leaving Chukwuma Okorafor and Zach Banner to duke it out for the right tackle spot.