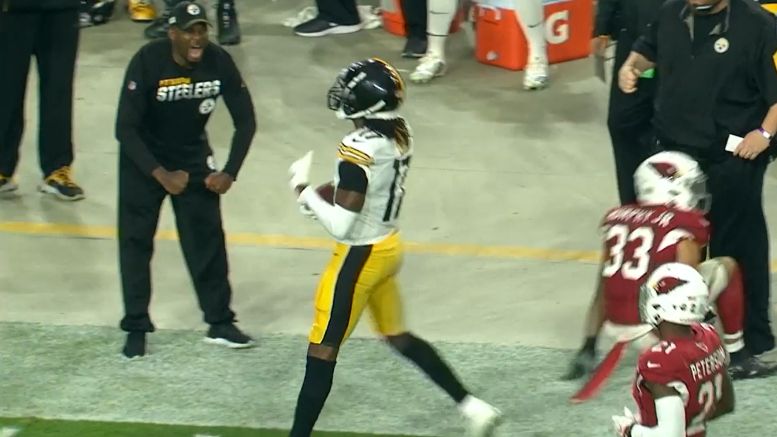 Deon Cain was a sixth-round pick out of Clemson in the 2018 NFL Draft, selected by the Indianapolis Colts. He spent his rookie season on injured reserve, and was only a limited contributor before he was waived in the middle of the year and re-signed to the practice squad. The Pittsburgh Steelers plucked him off there for the final six games of the season.

He would go on to catch five passes on six targets over the course of 70 snaps, gaining 72 yards on those catches. He also drew multiple defensive pass interference calls in his limited opportunities, and showed what his 6’2” frame with speed could accomplish.

“I am still young in this game, and I know I what I am capable of”, he told Chris Adamski of the Pittsburgh Tribune-Review. “Everything will come together. Just got to get chemistry with the quarterback. So now I am glad we’ve got this offseason to get together and put everything together”.

Of course, he hasn’t even played with ‘the quarterback’ yet, that being Ben Roethlisberger. He was lost for the season all the way back in Week Two, and subsequently had elbow surgery. He is still awaiting word on when he can resume even light throwing, toward the end of the month.

Which means that Cain was working instead with the likes of Mason Rudolph and Devlin Hodges, two players who had never thrown a pass in an NFL game prior to the start of the 2019 season. He did have somewhat of a connection with Hodges, and caught a couple of passes for explosive plays.

“I am definitely excited to see how everyone comes together and build the chemistry with everyone, because I know how much I can help this team out”, Cain added. “With what I’m capable of, and I am ready for everything to turn out”.

Entering the 2020 season, the Steelers’ wide receiver depth chart is wide open beyond the top three players, those being JuJu Smith-Schuster, James Washington, and Diontae Johnson, the wide receivers that they have drafted over the past three years with picks ranging from 60 to 66.

There isn’t an obvious number four right now. They have Ryan Switzer and Johnny Holton under contract, but the latter was never a real offensive contributor, and the former quickly fell out of favor before getting injured.

There is absolutely a window of opportunity for Cain to carve out a role for himself, especially being a taller player who could potentially act as a deep threat with his 4.4 speed and strength. He was a true junior coming out of college in 2018 and most believed he should have stayed and matured. The Steelers can help foster that maturity on the job now.