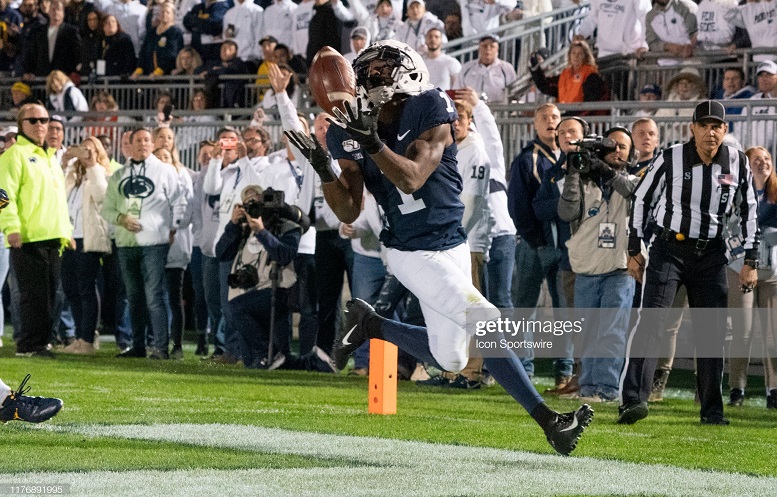 A lot of eyes will be on Penn State wide receiver K.J. Hamler when he goes through the annual NFL scouting combine paces on the field of Lucas Oil Stadium on Thursday and with good reason as he caught 98 total passes for 1,658 yards and 13 touchdowns in his last two seasons.

With the potential of Hamler being an early-round draft possibility for the Pittsburgh Steelers a few months from now, tonight is good time to over a contextualization of the pass targets he had in five of his 2019 games.

In the five 2019 games against Idaho, Pittsburgh, Michigan, Minnesota and Memphis that I contextualized of Hamler’s, he totaled 33 targets and caught 22 of those passes for 459 yards and four touchdowns. That works out to a stunning average of nearly 21 yards per reception.

Hamler’s average targeted depth and all 33 targets was a whopping 17.1 yards and his average completion was a very impressive 15.9 yards past the original line of scrimmage. Hamler also logged a 5.8-yard average after the catch on his 22 receptions I contextualized in these five games from 2019 and that stat is also impressive.

While 11 total targets to Hamler were incomplete, and three came via drops, most of the others were either defensed before they arrived to him or totally uncatchable.

As you would probably imagine, the 5085, 178-pound Hamler mostly worked out of the slot in these five contextualized games. It’s not hard to see why many are comparing Hamler to Kansas City Chiefs wide receiver Tyreek Hill due to his size, speed, and ability to get separation down the field.

A hamstring injury will prevent Hamler from running the 40-yard dash while at the combine and that’s too bad because it would be fun to see.

Hamler is yet another fine young wide receiver in a deep class and the fact that he can also return punts and kickoffs will certainly help his draft cause. He figures to be drafted somewhere during day-two.