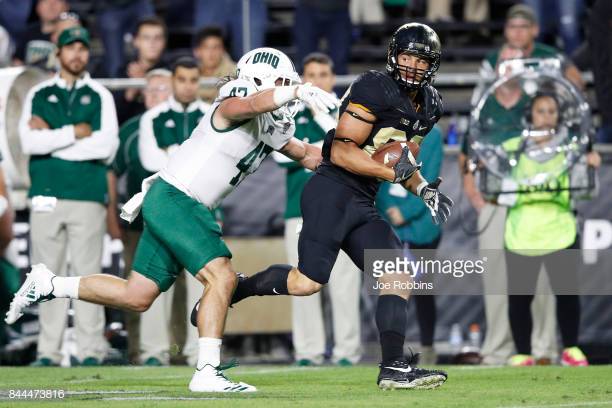 The tight ends were one of three position groups that measured in Monday at the 2020 NFL Scouting Combine in Indianapolis, IN. Included in that group of tight ends was Purdue’s Brycen Hopkins, who figures to be one of the first two or three selected at that position in 2020 NFL Draft. Hopkins measured in just under 6’4″ at 6037 and weighed 245-pounds. With Hopkins now safely weighed in at the combine, now is as good of a time as any to do quick contextualization of some of his 2019 targets.

In total, I was able to go through four of Hopkins’ 2019 games and contextualize all of his 40 targets in those contests against TCU, Wisconsin, Maryland and Iowa. In total, Hopkins caught 27 of those 40 targets for 395 yards. That 14.6 yards per reception on those 27 catches in those four games was one full yard greater than his average for the season.

These 40 targets to Hopkins had an average air distance of 8.9 yards. The 27 completions, on the other hand, had an average air distance of 8.3 yards. Perhaps the most impressive thing about these 27 completions of Hopkins’ that I contextualized for this post is the fact that the tight end averaged 6.3 yards after the catch on them. Three of those 27 receptions, however, accounted for 79 of his 171 total yards gained after the catch.

It’s worth also pointing out that Hopkins had four drops in just these 40 targets. That issue certainly is something that showed up throughout his entire college career as well so that’s something that needs to be considered.

It’s also worth pointing out that Hopkins’ 2019 season was hampered quite a bit by poor quarterback play as Purdue suffered quite a few injuries at that position that resulted in three different players starting throughout the year.

Hopkins’ route tree, like most young tight ends and wide receivers, needs to expanded and polished quite a bit. He should test well at the combine and thus leave Indianapolis just like he arrived, which is one of the top three tight ends in this year’s draft class. Even so, Hopkins, in my opinion, is borderline second-round talent and he might wind up not being drafted until sometime in the third.

Will the Pittsburgh Steelers have any interest in Hopkins? It’s possible, but spending a second-round selection on the Purdue tight end seems a little rich for my liking ahead of the combine getting underway.