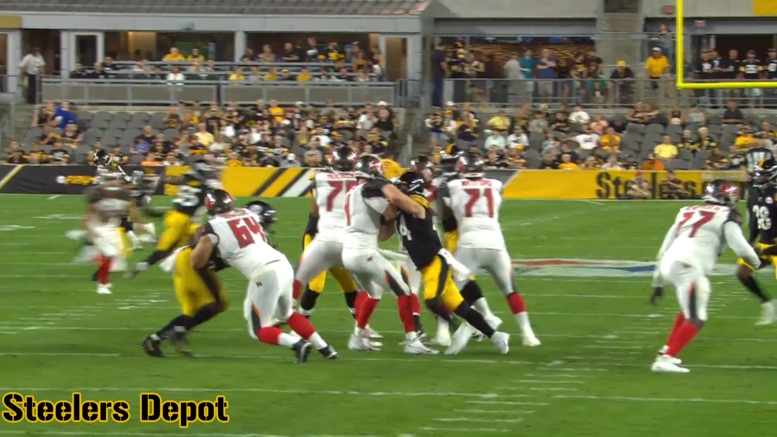 We might as well stick with the theme, completing the inside linebackers for now. Even though the Steelers are likely to release Mark Barron, I was still tempted to make the argument that four-year veteran special teams ace Tyler Matakevich’s stock is down.

That is because the team is in an offseason in which they are tight against the cap, he is hitting unrestricted free agency, and they found two young players at his position last offseason who also showed the ability to perform well on special teams—perhaps even with defensive upside.

Those two young players would be Ulysees Gilbert III, a rookie sixth-round pick, and Robert Spillane, who if memory serves was a futures signing. Gilbert made the roster and dressed, playing a lot on special teams. He was injured halfway through the season, however, and Spillane was called up from the practice squad to take his place, racking up 11 special teams tackles in just eight weeks.

If there is an inkling of any kind of market for Matakevich—it’s not unheard of for special teamers to actually be rewarded with meaningful contracts, and I’ll cite examples if I have to—the Steelers may think twice about trying to bring him back, depending upon how much wiggle room they feel they have.

One part of the equation is the Collective Bargaining Agreement and how soon one might be in place. If there is one completed by the time the new league year begins, that would benefit Matakevich if he wants to re-sign with the Steelers, because new doors would open for them in terms of how they could create cap space, which is currently limited due to the league being in the final year of the current CBA.

All that said, they did get full value out of Matakevich as a seventh-round dart throw. A highly productive college player, his skill set translated well to special teams, and he carved out a niche for himself that will undoubtedly continue, somewhere, in 2020. Whether that’s in Pittsburgh or elsewhere remains to be seen.