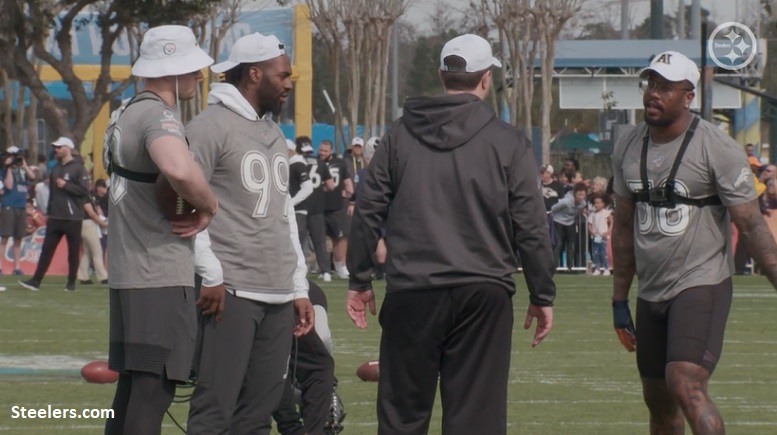 There seems to be quite a few NFL players trying to pick the brain of Denver Broncos outside linebacker Von Miller once again this past week at the 2020 Pro Bowl in Orlando, FL and Pittsburgh Steelers outside linebacker T.J. Watt admitted he was one of them. This is the second consecutive year that Watt has gotten the chance to pick the brain of Miller, who is now an eight-time Pro Bowler himself and this past week the proverbial Denver teacher was asked by Missi Matthews of steelers.com to give his thoughts on the Pittsburgh student.

“Yeah, he’s great, his motor is unbelievable,” Miller said of Watt. “And you can have all the moves in the world, you can have all type of techniques for all type of people you’re playing, but if you don’t have the motor like T.J. has, it just doesn’t work. You know, sometimes there isn’t a move, sometimes you just gotta make it happen and T.J. does a great job with all of that stuff.”

So, why does Miller feel compelled to help younger players such as Watt and even when comes to teaching how to handle the mental side of the game in addition to the physical side?

“I just feel like I’m so comfortable in my game and who I am as a player, that when it comes to helping other people, I don’t feel no type of way about it, Miller told Matthews. “I just feel like that’s what I’m supposed to be doing is passing the information that I’ve learned from the greats around the league, I’m supposed to be passing that forward. And it just wouldn’t be right to, you know, keep all that stuff. It doesn’t matter how great the players are, I feel like that’s just my duty to help guys out and pass the knowledge that I’ve learned.”

While T.J. Watt is doing his best to forge his own identity in the NFL and thus not just be known as the younger brother of Houston Texans defensive end J.J. Watt, Miller told Matthews that he feels the younger Watt has already achieved that goal.

Watt and Miller will be teammates once again later today at Camping World Stadium in Orlando, Florida and that game will be televised nationally by ESPN, while being simulcast across ABC and Disney XD. The game is slated to get underway at 3:00 p.m. EST.