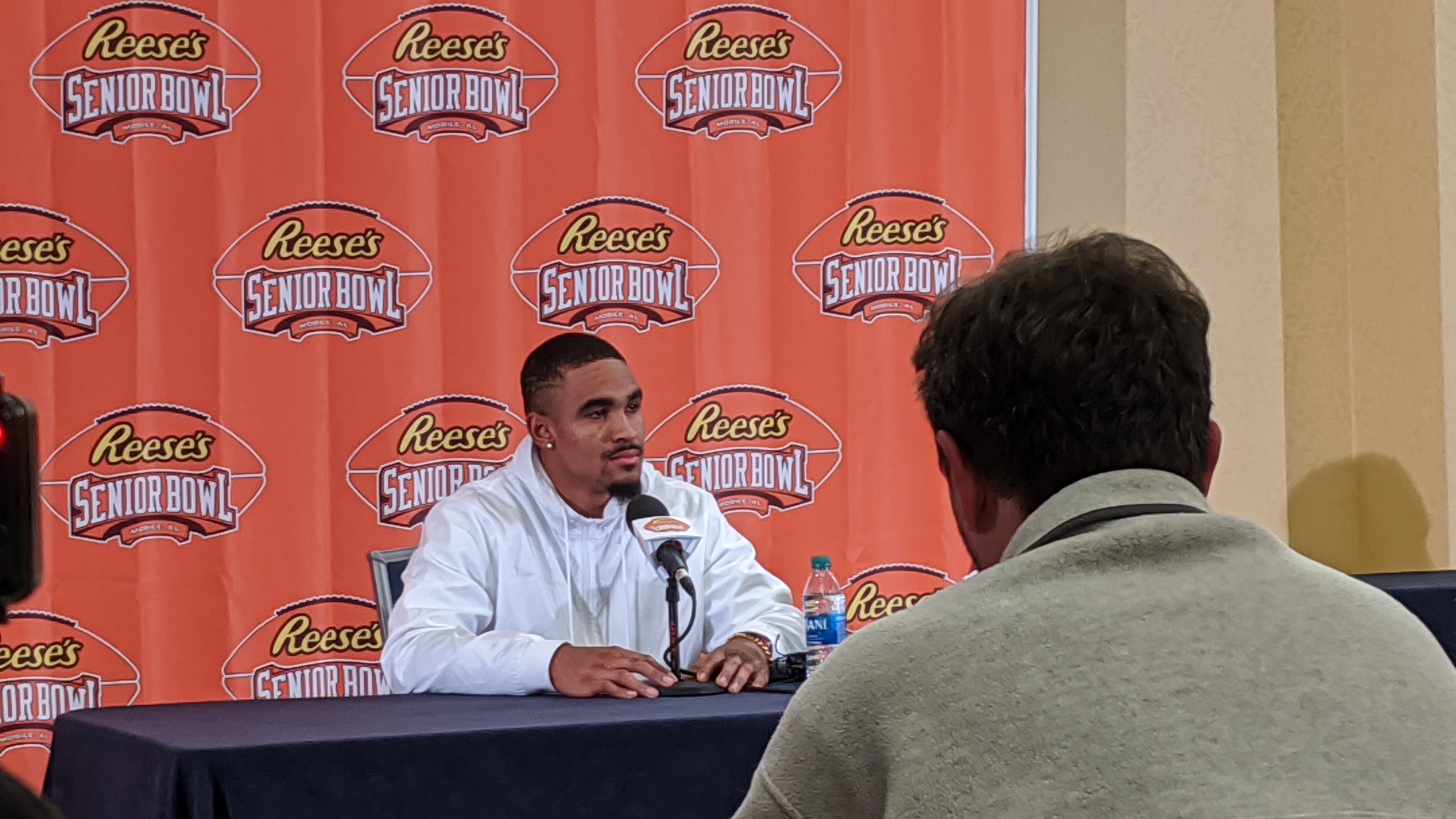 Versatility – that is where the state of the quarterback position is heading towards, if it is not already there. It is also one word that many will use to describe Oklahoma quarterback Jalen Hurts.

Hurts’ versatility became apparent as soon as Hurts approached the podium for the Senior Bowl’s opening press conference. The Oklahoma quarterback returned to the state of Alabama for this year’s Senior Bowl and he made sure to wear his versatility proudly. Not just on his sleeve either but also on his helmet.

Senior Bowl director Jim Nagy introduced the quarterback and presented him with a very special gift. A helmet representing both the Oklahoma Sooners and the Alabama Crimson Tide. No longer would Hurts have to choose between Oklahoma, a team where he has had a ton of success or Alabama, the team where he laid down the roots of his collegiate career.

Pretty cool moment here at the Senior Bowl: Jalen Hurts will wear a helmet representing both #Alabama and #Oklahoma during Saturday’s game. pic.twitter.com/L9iFSiPU0L

The helmet though very heartfelt in meaning to both of his former schools, really goes deeper than just his school affiliation. Hurts is not afraid to be versatile both on and off the field and that is how he has become one of the more dynamic prospects in the 2020 NFL Draft.

Hurts’ emergence on the scene should come to no surprise as mobility has taken over the quarterback position at the next level. In the jungle that is the NFL, where only the strong survive, it seems that quarterbacks must be able to win with not only their arm but also with their legs.

The Oklahoma quarterback was asked if playstyles like Lamar Jackson and Josh Allen fit his description and while Hurts commended their ability to succeed as dual threat options, he is not worrying about that. The only two traits he is focused on are executing and being efficient.

If there are two portions that Hurts really did well in last season, it was executing and being efficient. Not only did he complete almost 70-percent of his passes and throw for nearly 4000 yards but he also ran for another 1298 yards.

While there may be chatter about his fit and longevity in playing at the next level, Hurts does not pay much attention to the noise. Instead he listens internally and focuses most on staying true to himself.

“I think the biggest thing is never getting too high or low. Everybody has an opinion; everybody is going to say something. Regardless, you got to stay true to yourself, stay focused, have the right mentality to do what you need to do to win,” Hurts told a room full of media at the Senior Bowl’s introductory press conference.

No matter the circumstance, Hurts always stays to true to himself. But just who is Jalen Hurts? The numbers may tell you that he is a versatile quarterback, capable of winning through the air or on the ground. But the numbers do not capture Hurts’ true, organic persona. Hurts explained in his own words to the crowd in Mobile that he is simply a rare breed.

“I wear a wristband that says rare breed, I use that as a hashtag. I’m me, there’s not really a word you can put on it. I think I have every ability to extend every throw, make any play, I win.”

Hurts has shown the ability to do all three of the items listed. He can extend any play and make any play that he is asked but most importantly he wins. That is what makes Hurts such a rare breed and what will keep teams buzzing around his name as he nears the 2020 NFL Draft.