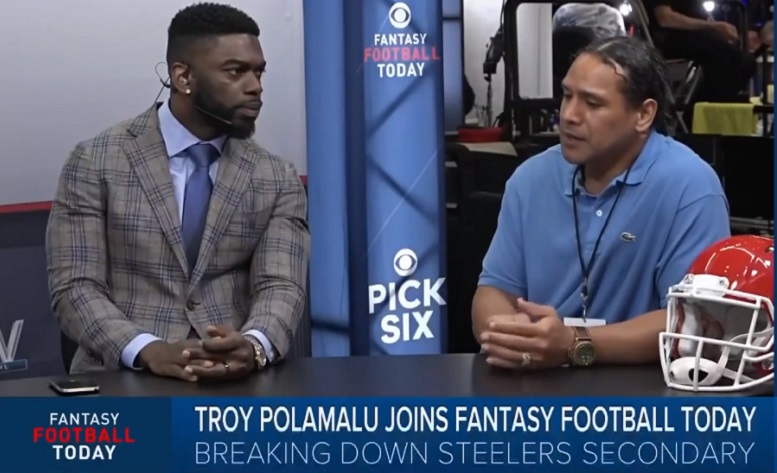 Is current Pittsburgh Steelers safety Minkah Fitzpatrick the second coming of former Steelers Troy Polamalu? Several fans and analysts seem to think so on the heels of the second-year Alabama product registering five interceptions and two forced fumbles this past season, most of which he spent with the Steelers after being acquired from the Miami Dolphins in a Week 3 trade. On Friday, Polamalu, who is a Modern-Era Pro Football Hall of Fame finalists this year, was asked by former teammate Bryant McFadden during an interview on CBS Sports HQ to weigh in with his thoughts on Fitzpatrick.

“Well, first of all, I think he’s a tremendous safety,” Polamalu said of Fitzpatrick. “I think that was a really great move for the organization to make. Anytime you have a defensive-led team, that sort of turnover is so huge, you know? And for him to come up with six interceptions, man, it’s hard to come up with interceptions generally in the league. So, for him to be able to do that, I think is really awesome and has been a key to really to the success of the defense.”

While Fitzpatrick certainly is off to great start in Pittsburgh when it comes to him producing turnovers and scoring off of them, he’s not yet done enough to be mentioned in the same sentence as Polamalu and I’m sure even he would agree with that statement. remember, Polamalu played most of his career as a strong safety and thus nearer the line of scrimmage. In addition to Polamalu’s 32 regular season interceptions, 14 forced fumbles and 12 total sacks, he also made quite a few other spectacular plays near and behind the line of scrimmage.

Fitzpatrick’s impact on the Steelers defense happened immediately and especially in the turnover department. That instant impact, however, resulted in opposing offenses quickly gaining respect for Fitzpatrick and thus not throwing anywhere near him during the second half of the regular season. That sort of game planning from the opposition resulted in Fitzpatrick not having any turnovers in the Steelers final seven regular season games.

“Yeah, we’ll definitely add to the arsenal of what I can do and moving around and stuff,” Fitzpatrick said during the week of practices leading up to the Pro Bowl. “Because that last half of the season, you know, I didn’t really have too much production. And it wasn’t because I wasn’t doing my job, it was just because quarterbacks were just staying out of the middle of the field, staying away from my half when I was in a half.

We’ll definitely wait and see how Fitzpatrick is ultimately used in 2020 but regardless, the Steelers decision to trade their 2020 first-round draft pick from him was a good one and it goes without saying that Polamalu has been impressed with Pittsburgh’s new turnover producer since his arrival.