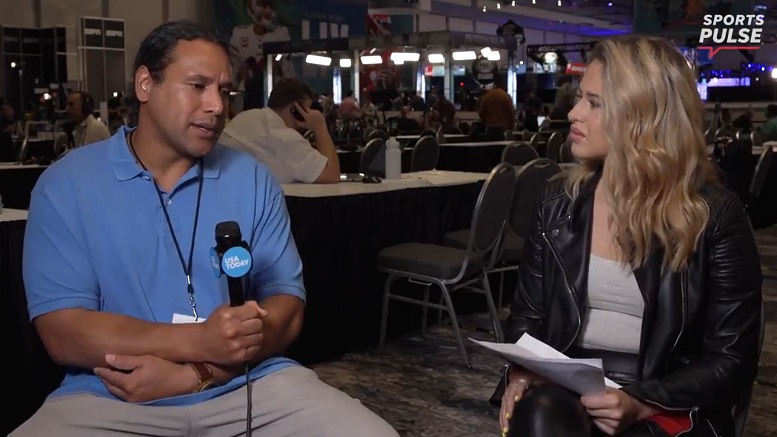 A lot of people are currently concerned about the well-being of  unemployed wide receiver Antonio Brown ahead of Super Bowl LIV taking place in Miami and that includes several of his former Pittsburgh Steelers teammates. On Friday, former Steelers safety Troy Polamalu, who is a Modern-Era Pro Football Hall of Fame Finalists this year, was asked to give his thoughts on Brown during a radio row interview with USA Today Sports.

Polamalu was asked on Friday if he’s talked to Brown recently.

“Antonio was a teammate of mine at Pittsburgh, definitely love him as an individual, as a person,” Polamalu said. “I feel bad that he’s going through whatever he’s going through in life. We definitely had a locker room that loves all players and former players and I amongst probably all of his former teammates from Pittsburgh have reached out to him. And I just hope that he understands that we love him and that we’d have no selfish ambition in trying to help him or reach out to him.

“And I feel bad for him because it’s tough, especially for people in that situation that he’s coming up from. I mean, he had nothing in his life. He grew up here in Miami, couldn’t trust anybody. You get to the league where they just want to use you for your talents and not necessarily for who he is and it’s hard to find trust in anybody given in that position. But I definitely hope the best for him. And he’s overcome so much in his life, this is, to me, I feel it’s just another hurdle that he’ll overcome as well.”

That’s very nicely put by Polamalu and on the surface, it does appear as though he and several former Steelers teammates have at least reached out to Brown recently in some form or fashion in attempt to help the troubled wide receiver and potentially convince him to seek and accept professional help.

On Friday, Steelers wide receiver JuJu Smith-Schuster reached out to Brown on social media following a post from on Thursday night that insinuated there is no longer a problem between the two players on his end, That Thursday night social media post from Brown came on the heels of comments made by Smith-Schuster during a morning interview with former NFL punter Pat McAfee in which he stated he was concerned about his former teammate.