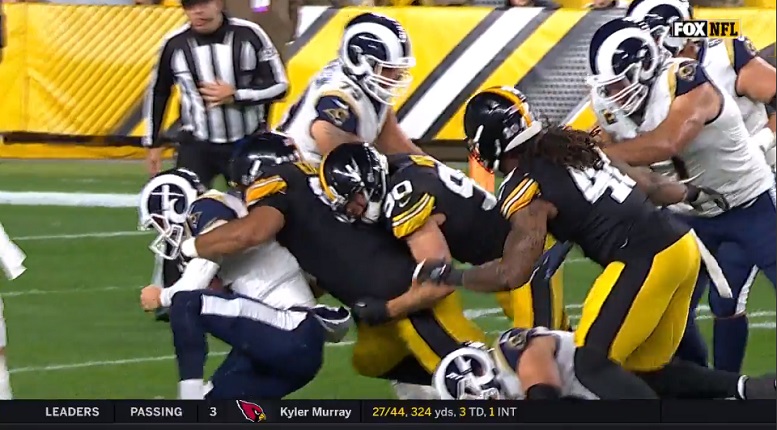 For the third straight season, the Pittsburgh Steelers led the NFL in sacks. The city of bridges has rediscovered its claim as the city of pass rushers as well. The Steelers have inflicted a ton of pain on opposing quarterbacks over the last number of years with most of the damage coming from T.J. Watt and Cameron Heyward. But this year, another member of the defense joined the duo.

Bud Dupree had a breakout year in 2019 and thus for the first time in a very long, the Steelers had a three headed monster in their pass rush. Watt finished with 14.5 sacks, Dupree notched a career high 11.5 sacks while Heyward also contributed nine sacks of his own. Together, the trio accounted for 65-percent of the team’s sack totals but while their pass rush numbers are certainly impressive, it is also very rare for a team to have three capable pass rushers.

Teams That Had Players Record Nine Sacks Or More In 2019:

There have been 10 occasions in Steelers’ history where two pass rushers have registered nine sacks in a season but having three players hit that mark? That has only happened twice, including this season. It is the first time the Steelers’ have had three players record nine or more sacks in a year since 2001 when Kendrell Bell, Jason Gildon and Joey Porter all got to the quarterback at an impressive rate.

Having two pass rushers be able to effectively get to the quarterback, well that is a luxury – a luxury that the Steelers have been blessed with for a number of years. But having three capable pass rushers, well that is like hitting the jackpot. And the Steelers hit the jackpot this season as Watt had a phenomenal season, Heyward was his same consistent self and Dupree shattered the glass ceiling that hung above him.

The Steelers hit the jackpot in 2019, now the only question is how can they hit the jackpot again in 2020 and for many years beyond that? Watt and Heyward will be members of the team for the foreseeable future but the team faces the possibility of Dupree departing in a few months. Luckily, the Steelers have some control over his outcome.

With his contract expiring, the Steelers can franchise tag or even transition tag Dupree before he is set to become a free agent. Doing so would buy some time to negotiate a long term contract and if that is accomplished, it would keep the three headed monster together for years to come.

In Watt, Heyward and Dupree, the Steelers have a very rare luxury car sitting in their garage. They have worked on it for years, and just last year, they finally got to take it out for a cruise. It was the most pleasant ride the team has experienced in quite some time, there were no bumps on the road and the car ran perfectly. After spending year after year perfecting their luxury to perfection, it is hard to imagine that the Steelers would suddenly want to replace a working part with an unknown part.

The Steelers enjoyed a luxury with Watt, Heyward and Dupree and hopefully they will be able to utilize that luxury again in 2020.