I’ll have a full update on the Pittsburgh Steelers 2020 salary cap situation within the next few weeks and that will most definitely be needed with so much misinformation currently being spread on the topic across other various sites. Ahead of my full 2020 salary cap update, however, I thought I would provide a full list and breakdown of the dead money the Steelers are currently having to account for in 2020.

As you can see in the table graphic below, the Steelers currently have $2,568,962 in dead money they are needing to account for against their salary cap in 2020. Quite a few players on this list are either 2019 draft picks or undrafted free agents.

The Steelers largest dead money charge to date for 2020 belongs to former wide receiver Donte Moncrief, who was waived by the team in early November. Additionally, a dead money charge of $139,781 is seen below next to the name of former Steelers quarterback Joshua Dobbs, who was traded to the Jacksonville Jaguars this past September.

While we’re on the subject of dead money, it’s important to note that unless a CBA extension is agreed to in the near future, team’s will not be able to use a Post June 1 designation on players they wish to terminate contracts of this offseason and through the 2020 regular season.

The Steelers 2020 dead money total is sure to grow this offseason and by quite a bit at that. For example, should the Steelers ultimately decide to part ways with outside linebacker Anthony Chickillo, inside linebacker Mark Barron and guard Ramon Foster this offseason, the termination of those three contracts would produce a total dead money amount of $5,547,500 that would need to be added to the $2,568,962 already on the books.

Finally, according to the NFLPA, the Steelers currently have $3,081,389 in available 2019 salary cap space that the team will surely be rolling over to 2020. That amount isn’t much more than the amount of dead money the team currently has on the books for 2020. 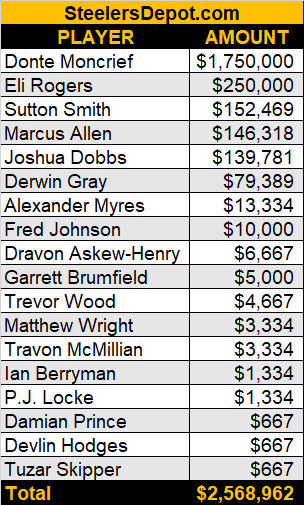