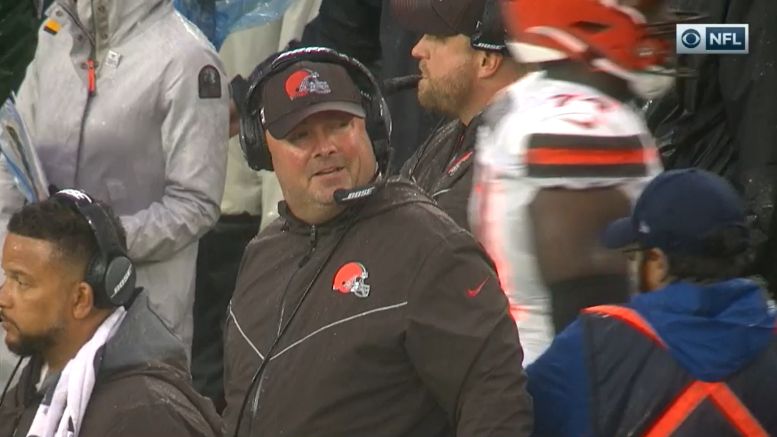 The Cleveland Browns were among the first to dump their head coaches this offseason, but took the longest to fill their vacancy—though considering that we still have three weeks before the Super Bowl, things have all in all been a speedy process.

According to reports, the organization, essentially helmed by Paul DePodesta at this point, have chosen Minnesota Vikings offensive coordinator Kevin Stefanski to be their next head coach, for at least half of the next season (that’s a joke; presumably he will sign something like a five-year contract, and then be fired after two years).

Many head coaches these days who are promoted from offensive coordinator roles opt to ‘stick with what got them there’, e.g. calling plays. The Browns’ two head coaches—Hue Jackson and Freddie Kitchens—did that, and it clearly worked out well for them.

Even though Kitchens called the plays last season, Cleveland still had an offensive coordinator in Todd Monken who handled other responsibilities outside of that primary duty. With Stefanski coming in, reports are that Monken is not expected to be retained;. While this may be an organizational decision, I wouldn’t be surprised if he wants out.

According to reports, Monken had no trouble bad-mouthing his employerv—and neither did the players. While the likes of Jarvis Landry were said to have pleaded to opposing sidelines to ‘come get me’, the nominal offensive coordinator was simply chatting with opponents and letting them know that everything really is as bad as it seems.

The phrase he’s quoted as using to describe the state of the Browns was a “total mess”, which seems apt in many ways. He also reportedly told those on opposing teams that the play-calling of Kitchens often veered from what the team had game-planned. There have also been reports about unnamed players calling the play-calling unsustainable.

In some ways, the Browns’ offense was quite successful this year. They produced their first trio of 1000-yard skill position players with both Landry and Odell Beckham topping that in receiving yards and Nick Chubb going for over 1000 on the ground.

More significant, of course, is the fact that they only averaged 20.9 points per game, which ranked 22nd in the league on the season. Despite only ranking one spot higher a year ago, they averaged 24.5 points per game. The league simply had more scoring from top to bottom in 2018.

As far as Stefanski goes, he is reportedly the candidate that DePodesta wanted to hire as head coach last year over Ktichens. Now he gets his way, but if Stefanski also flames out, one has to wonder if his time in Cleveland may also finally be over. He has been with the organization for four seasons.