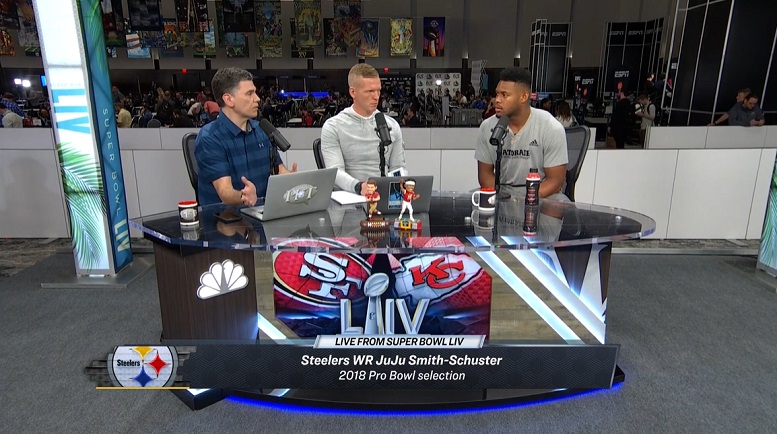 Even though the Pittsburgh Steelers ultimately failed to make the playoffs this past season, head coach Mike Tomlin received quite a bit of praise during the second half of the season for keeping his team very much in the playoff picture despite the enormous amount of unfortunate obstacles that needed to be overcome dating back all the way to the offseason. On Thursday, Steelers wide receiver JuJu Smith-Schuster was a guest on ‘Pro Football Talk Live’ and he was asked to talk about what he learned about Tomlin and the effect he had on the team throughout the 2019 season while all the turmoil and adversity was going on.

“It’s so crazy because as a young dude, I kinda like sit back and I watch like how these guys react, how the captains react, how’s Coach Tomlin react,” Smith-Schuster said “And for him, it’s more like, I mean, the standard’s the standard. You know, no matter who we have on the field, let’s go out there and dominate. And it’s so crazy because all I can think about is like, oh, wow, like he’s composed, he’s calm. Every meeting. He’s not one of those guys like freaking out, like, ‘oh, who’s gonna play this week? Who’s gonna play that week?’ Nah, he’s like, ‘let’s go out there and dominate.'”

Smith-Schuster was part of those several obstacles that Tomlin had to deal with in 2019 as the wide receiver missed four and half games due to injuries. Smith-Schuster also dealt with a lot of fan and media criticism throughout the 2019 season as well because of his drop off in play and production. Those missed games due to injuries and the increased criticism from outsiders all came after Smith-Schuster was emotionally impacted heavily by the sudden death of his position group coach Darryl Drake during training camp. However, all the turmoil that Smith-Schuster went through last season helped the young wide receiver learn quite a bit about himself.

“Man, I learned about myself is that I faced a week where I was out for five weeks,” Smith-Schuster explained to Mike Florio and Chris Simms. “I think, mentally, it kind of took a toll on me because, like, man, you’ve got to understand how to come back from that and stay positive. And that’s what I learned about myself, my body. I’m still young.

“So, for myself, it’s like, man, I want to play for a long time, so I’ve got to take care of myself and my body. But I think the majority of all this that happened to us this season is that anything that can happen. And no matter what happens, you still have control of your future. And like I said, this past season, we came a long way.”

Obviously, Smith-Schuster is hoping to have a huge bounce back season in 2020 and possibly one that will rival the one he had in 2018, his second season in the league. Assuming he doesn’t receive a contract extension this coming offseason, and there’s no sign that he will, 2020 will be a contract year for Smith-Schuster. He’ll also likely be expected to be even more of a leader in 2020 and especially after learning what he did from Tomlin and himself this past season.